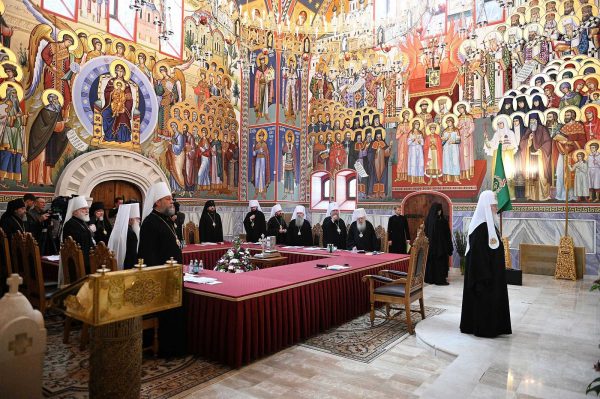 The Holy Synod of the Russian Orthodox Church expresses profound concern over the worsening situation with the dioceses of the Serbian Patriarchate in the territory of Montenegro where during several years the unity of Orthodoxy has been suffering from the schismatic actions of the so called Montenegrin Orthodox Church.

An alarming trend of increasing the authorities’ pressure on the canonical clerics and laypersons has emerged in Montenegro. The Holy Assembly of Bishops of the Serbian Orthodox Church held on May 9-18, 2019, stated: “there are attempts to violently take away our holy sites in favour of the canonically and realistically non-existent ‘Montenegrin Orthodox Church’ and threats to destroy” certain places of prayerful veneration. President of Montenegro Milo Ðukanović at the party meeting in Nikšic on June 8, 2019, voiced an intention to “restore the Montenegrin Autocephalous Church.”

The draft law on freedom of religion or beliefs and legal status of religious communities published by the government of Montenegro in May 2019 gives rise to anxiety. The draft contains several discriminatory measures, for instance, requisition to the title of the state of a part of the Serbian Patriarchate’s property, including church buildings and monasteries. The Holy Assembly of Bishops of the Serbian Orthodox Church characterized this draft law as “anti-European and anti-civilized,” aimed at the discrimination against the Serbian Patriarchate’s dioceses in the territory of Montenegro and “direct interference into internal Church affairs.”

Serious remarks on certain provisions of the draft law were made by the European Commission for Democracy through Law (Venice Commission).

We take the recent initiatives of the Montenegrin authorities with concern and call upon them to stop discrimination and frustration of the unity of the Serbian Orthodox Church. We raise our voice in her defense while seeing the centuries-old historical foundation, on which the Montenegrin Orthodox culture and statehood have been built, in the spiritual tradition tracing its origin to St. Sava.

The Holy Synod of the Russian Orthodox Church expresses brotherly support to the bishops, clerics and all faithful of the Serbian Patriarchate in Montenegro who, fulfilling the precepts of the great saints having shone forth in this land: Sts. Sava of Serbia, Basil of Ostrog, Peter of Cetinje and hieromartyr Joanicus of Montenegro and the Coast, remain faithful to the truth of Holy Orthodoxy despite the hardships of oppression.