Statement on the Reception of Refugees in the United States 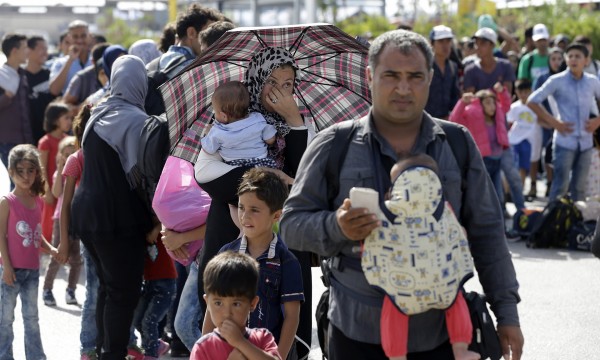 Refugees and migrants wait for the bus to transport them onward after their arrival from the north-eastern Greek island of Lesbos to the Athens port of Piraeus. Photograph: Thanassis Stavrakis/AP

Since the tragic terrorist actions in Paris, Beirut, Mali and elsewhere in the past two weeks, there have been polarized reactions to the reception of refugees, mainly of Syrian nationality, worldwide: an understandable reaction of concern on the one hand, but a sad overreaction of fear on the other. We are all concerned first and foremost for the safety of the citizens of the United States which must be continually addressed and assessed. At the same time, the humanitarian disaster caused by the war in Syria to which the U.S. government has contributed by calling for the removal of the established Syrian leadership – as it did in Egypt, Iraq and Libya – requires a moral response from the people and government of our great country. Misguided U.S. foreign policy helped create the so-called “Arab Spring” which has been a “tornado” that has destroyed Arab countries, leaving power vacuums that have fostered the soaring, vicious activity of terrorist groups including ISIS, al-Nusra, and others in the Middle East and around the world. All of this has resulted in an unprecedented number of deaths of innocent people and lack of basic services like healthcare and sanitation, healthy food and drinking water, safe and dignified housing, and so forth.

We must us not be guided by fear or bigotry, but rather let us work to heal the wounds of the injured, clothing the naked and feeding the poor as our Lord, God and Savior Jesus Christ has taught us (Matthew 25:35-36).