Source: Greek Orthodox Archdiocese of America
We appeal to the world’ s 2.2 billion Christians, as well as to all people of faith and good will, and ask them to keep the two bishops in their daily thoughts and prayers.
Natalya Mihailova | 26 April 2014 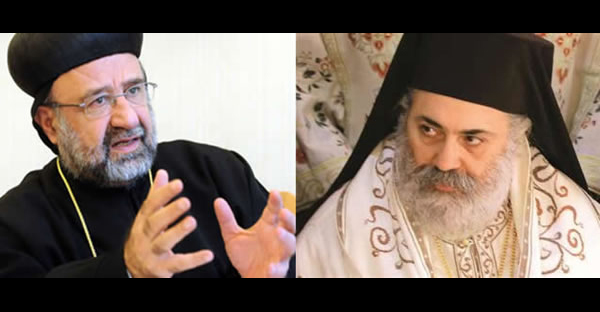 NEW YORK – The Assembly of Canonical Orthodox Bishops of the United States of America issued the following statement on April 22, 2014 for the one-year anniversary of the Bishops abducted in Syria.

1. We, the Hierarchs of the Assembly of Canonical Orthodox Bishops of the United States of America, representing millions of Orthodox Christians, express our grave concern over the escalation of unrest and ongoing violence in countries throughout the Middle East, especially in Egypt, Iraq and Syria.

2. Our Assembly denounces any and all attacks—whether by means of violence, kidnapping, torture or killing—on all fellow human beings, irrespective of their race, ethnic origin, and religion. Moreover, we deplore the destruction of all places of worship or their forced conversion from their original intent.

3. We are especially disheartened at the inexcusable indifference and unjustifiable inaction of local and national governments, which have failed to protect the Christian population in these regions. We are also gravely troubled that representatives of the ancient Christian communities in Syria are not included in the peace and reconciliation process. Christians in Iraq, Egypt, and Syria have peacefully coexisted with people of all faiths in the region for two thousand years. As such, they must be respected and included in all decisions toward social and political justice.

4. One year ago, on April 22, 2013, the Greek Orthodox Metropolitan Boulos Yazigi (brother of His Beatitude Patriarch John X of Antioch) and the Syriac Orthodox Archbishop Yohanna Ibrahim, both of Aleppo, Syria, were kidnapped by Islamist extremists during a joint philanthropic mission in the region. With sorrowful hearts we recognize a growing lack of interest on the part of civil authorities to assist in the recovery of the two Christian leaders. We encourage all people of good conscience to communicate with their elected officials and ask them to assist in the effort to find and retrieve the two bishops. We implore the Holy Great-Martyr Saint George, the patron of Christians of the Middle East and upon the eve of whose Feast the Hierarchs were kidnapped, to intercede for their salvation and safe return.

Moreover, we appeal to the world’ s 2.2 billion Christians, as well as to all people of faith and good will, and ask them to keep the two bishops in their daily thoughts and prayers. We also ask the Orthodox Christian faithful of our Assembly’s region to offer a special petition during the Great Litany of all divine services during this 40-day Season of Pascha. Before the petition commemorating the Most Holy Mother of God, we ask that the following petition be included:

For the safety of Metropolitan Paul and Archbishop John and for their return to their communities, let us pray to the Lord.