Statement of the Order of Saint Andrew the Apostle, Archons of the Ecumenical Patriarchate regarding the Plight of Christians in the Middle East

Source: Order Of Saint Andrew
The simple fact is that, in the modern world, people of different faiths must engage in dialogue aimed at resolving differences and co-existing peacefully.
Natalya Mihailova | 05 August 2014 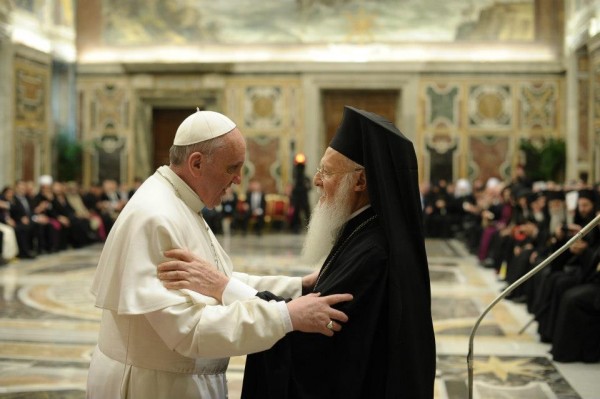 The Middle East is where Judaism, Christianity, and Islam first began, and for centuries these three communities have co-existed. In recent times, however, Christians across the Middle East have increasingly become the victims of political conflicts between Israel and the Arab States and horrific persecution by Islamic extremists. As a result, many of the most ancient Christian communities in the world are teetering on the brink of extinction. The ongoing exodus of tens of thousands of Iraqi Christians from Mosul into Kurdistan is the latest example of religious cleansing and genocide. Islamic State insurgents occupying Mosul imposed an ultimatum on Iraqi Christians: convert to Islam, or pay a special religious levy known as “jizya”, or face death.

For too long, the world’s political leaders have remained silent while this intolerable persecution and the problem worsens. If this silence continues, history will no doubt ask why. Some will say that the problems are complex, and beyond the control of outside parties and governments. Others will say that, by the time they had the opportunity to act, the eventual result — eradication of Christians from the Middle East — was a fait accompli. These responses are unacceptable and make those giving them complicit in what is fast becoming one of the great tragedies of the modern age.

The simple fact is that, in the modern world, people of different faiths must engage in dialogue aimed at resolving differences and co-existing peacefully. Recent events have demonstrated that this is possible. On May 25-26, 2014, Pope Francis and Ecumenical Patriarch Bartholomew met in Jerusalem to continue the healing process that resulted from the “Great Schism” of 1054 A.D. when Christianity split into Eastern (i.e., the Eastern Orthodox Church) and Western (i.e., Roman Catholic) Churches and led to violence, including the sacking of Constantinople in 1204 by Catholic forces during the Fourth Crusade. This healing process began when Pope Paul VI and Ecumenical Patriarch Athenagoras met in 1964. If this centuries old division, with its own history of betrayal and violence, can be the subject of productive dialogue, why cannot similar dialogue begin among Jews, Christians and Muslims, and for that matter, between Sunnis and Shiites? The answer to this question no doubt lies in the growth of the extremist view that peaceful co-existence is neither an option, nor is preferable.

So, what then can be done?

The answers to that question are numerous. First, the United States and other governments should make non-humanitarian aid to countries where persecution exists contingent on efforts to strengthen religious freedom and human rights. Where persecution exists, aid should cease. Second, diplomats must be educated on issues of religious freedom and the problems faced by religious minorities throughout the Middle East. This will enable them to act more effectively when problems arise. Third, businesses should be urged to work with governmental and non-governmental organizations to promote religious freedom and make religious freedom part of their business plans. With respect to those countries that are the most egregious violators, businesses should be urged to boycott doing business therein. Finally, public figures, business leaders, and government officials in offending countries should be denied travel visas and perhaps even face economic sanctions — they must be made to feel the pain that they either cause or are complicit in via inaction. While more must be done to address the roots of sectarian tensions in the Middle East, if these steps are implemented, then the world will have at least acted to make resolution, rather than exploitation, of those tensions a priority. The time for action is now before it is too late. The fact is that the world can no longer remain silent, for it will mean the extinction of the world’s oldest Christian communities.

His Eminence, Archbishop Demetrios of America, has issued a Statement calling for prayers for the Christians in the Middle East “who have endured unimaginable suffering because of their faith.” He has declared that “as members of the one Body of Christ (Rom 12: 4-5), we must not forget our calling to stand in solidarity with our brothers and sisters.” Contact your elected representative and express your concern about the plight of Christians in the Middle East. Do the same with business people with whom you interact. Keep the problem active in your consciousness, because if enough people do this, positive change can and will happen.