Source: Ramblings of a Redneck Priest
Archpriest John Moses (+2019) | 06 April 2018
Have you ever had dirty feet? I mean feet so dirty they smelled bad? 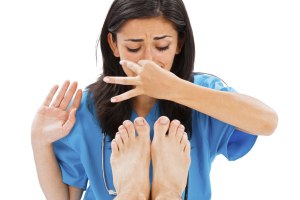 I had just moved into my first dorm room. I was excited to meet my roommate. He had already moved in and as it turned out, he was an athlete and a really nice guy. He went off to practice while I got settled in. He returned after dinner and when he took off his tennis shoes, I thought I would die. I could understand since he played football, but I wondered what he would do about the smell. Well, he did nothing and seemed oblivious to it. He went to bed early, but I found it hard to get to sleep. Not wanting to make waves, I gave it a few days to see if there would be any improvement, but there was none.  Finally, I went to the dorm manager and asked to be moved. When he asked why, rather than complain, I took him to the room. When he stepped in, it only took a moment until he understood my problem. Since then, I’ve smelled bad feet, but never any as bad as that.

Of course, I’ve had dirty feet, and sometimes they smelled, but I’ve tried to keep them clean and fragrance free. I’ve done some foot washing for other people (the children, of course) and some of it was done in church. I’ve even had my feet washed in church. It is a humbling experience.

Like the Great Host, Jesus washed the feet of his disciples. Like all things that he did that night, Jesus showed that he was doing more than simply washing feet. First, he showed that leadership always meant service. Then, He was making the bond of love between them even stronger than before.  That being so, I reply as Peter did: Lord, don’t just wash my feet. Wash my hands and head and all of me.

In the culture and time of Jesus, a host would give water to his guests so that they could rinse their feet.  Palestine being a rather dusty place, you wouldn’t want to have your guests to come to the dinner with dirty feet. Also, since the sun could dry out your scalp, the host gave oil for this. Failure to do these things demonstrated the either the host was a poor host, or he held some hidden animosity against you.

Jesus had been invited to the house of a Pharisee to eat, but the host did not show the proper hospitality. Jesus could have been offended, but he was not. Yet, a woman came who not only fulfilled proper hospitality, but went beyond it.  Instead of water, she washed the feet of Jesus with her tears and anointed his head with oil.  To such a display of love and repentance. Jesus said to her what we all long to hear from Him: “Your sins are forgiven.” This was the Lord’s way of washing her dirty feet and anointing her head.

On the fifth Sunday of Lent, we remember another woman who washed the feet of Jesus with her tears. Her name was Mary and she spent 40 years in the deserts of Egypt weeping in repentance. The Lord Christ washed her dirty feet and gave her purity of heart and union with Him.  The history of the Faith is filled with many who found the same state of grace.

My feet are dirty. The waters of Baptism washed them clean, but I am afraid to say that I have often jumped into the mud puddle.  I would certainly wash His feet with my tears of repentance so that I can hear him say again that my sins are forgiven. I don’t doubt that they are, but I would still love to hear His voice. He is always willing to wash my feet for He is the true Servant.  I know this by faith but I would love to hear his voice again. As a pastor in the Protestant church, I heard many ask me if God was angry with them or how could they know that they were saved. These worries came from people who had made a confession of faith, been baptized, and who had demonstrated their faith and trust in Jesus. I did my best to assure them.

As a matter of fact, Orthodox Christians can hear His voice. We hear them from the voice of our priest when, at the end of confession, he tells us that because of our repentance, our sins are forgiven. How wonderful to hear this. Yet, to be authentic, we must do our part and wash the Lord’s feet with our tears, tears of real contrition and sorrow. My spiritual father would always ask me if I felt any sorrow for my sins. I did, but maybe not enough to really change my life.

Some may object that the priest does not have the right to say this. The Pharisees present at the dinner said the same in their hearts: “Who is this that forgiveth sins also?”  It takes a bit of theology, Scripture, and history to explain this, but there is one Scripture that is most relevant. In St. John, chapter 20, the Resurrected Lord comes to the disciples, breathes on them and gives them the Holy Spirit. Then he says, “Whosoever sins ye remit, they are remitted unto them; and whosever sins ye retain, they are retained.” This ministry was given to them, and they passed it on in the priesthood by “the laying on of hands.”  It is the Lord’s way of washing our dirty feet.

Are your feet dirty? The Lord will gird himself and wash them if you will let him. But will you wash His feet with your tears? It’s up to you. I will say that if you wait too long, your soul will begin to stink like my athletic roommate’s feet.