Great Thursday: Why One Should Wait For This Day For The Whole Year

Bishop Jonah (Cherepanov) | 28 April 2016
Passion Week in both cities and countryside is a need to combine the long prayer at a church with various pre-holiday worries. Therefore a thought of not taking Holy Communion on Great Thursday crosses one's mind every now and then, because Holy Communion will also take place on Pascha anyway. How can one check oneself in this situation? Bishop Jonah (Cherepanov) of Obukhiv, Vice-Rector of the Holy Trinity-St. Jonah Monastery in Kiev, answered this question. 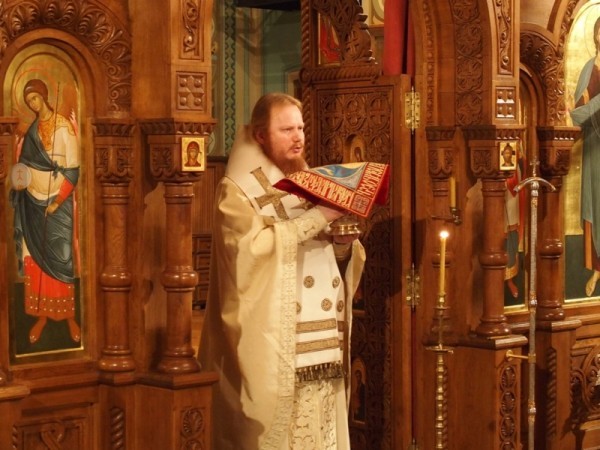 I will tell you about an occurrence that took place at our monastery. One day one of the brethren delivered a sermon on Great Thursday. He was quite a talented and zealous preacher.

On that day the Lord inspired him and directed him so that his sermon was indeed wonderful and heartfelt. I myself listened to it in awe and felt exalted.

After the sermon, I walked out the altar inside the church. Holy Communion was about to take place. Then a woman with tears in her eyes came to me and said, “Father, I was not going to, but I understand now that I have to take Holy Communion today. Bless me even though I was not preparing for it…”

I blessed her of course, because it was such a day and the woman clearly seemed to feel being present at the Lord’s Supper and to feel that not being part of it would be like resembling Judas. I believe the Lord accepted her among the communicants on that day…

People should understand the ultimate goal of all pre-Paschal preparations. Indeed we do not aspire to celebrate someone’s birthday, Name Day, or some public event that has nothing to do with the Church. This is in truth “the Lord’s Day”, the Resurrection of Christ. It is absolutely absurd to avoid the Lord’s Sacrament for the sake of preparing for the Lord’s Day.

It is better to not prepare for Pascha from the earthly point of view – to not cook some holiday meals, because we will eat a lot during the post-Paschal days anyway. But now it is Passion Week. Walking with the Lord and His disciples on this sorrowful path of the Passion is the most important. Thus, Pascha will be a feast for us, the true “Feast of Feasts”.

– The main tune of the liturgy on Great Thursday is the hymn “Of Thy Mystical Supper, O Son of God, accept me today…” It has the words, “For I will not speak of Thy Mystery to Thine enemies, neither like Judas will I give Thee a kiss.” If we are speaking about modern Christians, what is the mystery we may give away and to which enemies of the Lord?

– We remember these words not only on Great Thursday, but also during every liturgy while we are preparing for Holy Communion.

The Holy Fathers said that we “crucify” the Lord by our sins. When we sin, we indeed turn away from Our Lord and turn towards sin.

Any sin is the betrayal of God. Every time we make a confession, we remember that we became like Judas again and again and like those apostles who left Christ, who escaped leaving Him alone.

However we have two paths: the path of Judas and the path of St. Peter. We should always remember that we are with St. Peter and that we are the disciples of the one upon whom the Lord built His Church. One would wish to act the way the Apostle Peter did. Even though he committed an act of cowardice and denied Christ, he found the strength to repent, and most importantly, to change himself.

Later it was him, the timid fisherman who denied knowing “that Man” three times, who became the bravest Gospel preacher. We should always remember this and look at his good example.

–  The unbelievers reproach Christians for using a confession to soothe one’s conscience. Sin as much as you like in whatever way and then make a confession and live as if nothing happened. They consider a confession and Communion to be an easy path. Is it so?

–  A confession does not help a person to relax, but I would say that it is quite the contrary. It makes one responsible. It is a kind of examination, before, during and after which we have by no means a feeling of easiness and freedom, on the contrary, we feel concentrated, attentive and responsible.

Why is it essential to make a confession as often as possible and why should one hurry to take part in this sacrament? We know the Lord’s words, “As I find you, so will I judge you.” It is truly unknown when the Last Judgment of the Lord will come. It is to begin with.

Furthermore, there is a concept of sinful habit, practice of sin. If a person makes a confession once a week, they will have one list of sins: this person will remember their minor misdeeds and wrongdoings more clearly. This forces one to pay more attention to oneself.

However, if one makes a confession once a month or even less frequently, one’s heart will be covered with a kind of scab, under which only the biggest and obvious sins are seen. This will be a completely different list of sins, because one will hardly pay attention to less apparent, but not in the least less dangerous sins.

If one does not make a confession right after one sinned, the wound in one’s heart (and any sin is precisely a wound) will start growing and increasing. For example, a small cut in one’s heart is hardly noticeable, but it grows invisibly and may grow into a critical size so that even surgical treatment would not help to stop this process.

Here it is the same. While the cut is small, while the sin is “fresh” and we see it, we should confess it as soon as possible, so that nothing would burden ourselves and press us down to the ground, so that we could soar to Our God with all our hearts.

This was recorded by Julia Kominko.

On Why We Pray So Much

The way it was done by the Apostles. - Your Grace, can you answer the question, why everything…