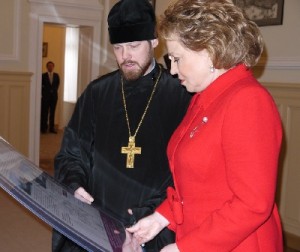 Greeting this eminent leader from Russia, Father Phillip wished her God’s help in important state affairs during days of Great Lent. According to the priest, the Russian church in Strasbourg will become the fulfillment of hopes of numerous Russian-speaking believers living in both France and neighboring Germany, who need spiritual support. He said that this is a historic moment, as the Russian Orthodox community has already obtained a building permit from French authorities; and just this week, the community was granted a piece of land by the city for a period of 99 years. Igumen Filipp explained that this parish has special importance because of its located at the Representation of the Russian Orthodox Church to the Council of Europe. He also said that the building of the Church complex in Strasbourg is under the patronage of his Holiness Patriarch Kirill of Moscow and All Russia, who is at the head of the board of trusties of the building.

“One of the dynamically developing areas in the Council of Europe is the religious dimension to intercultural dialogue. In Russia, there is a rich experience of good relations between traditional religions: Orthodox Christianity, Islam, Buddhism and Judaism and this experience is in high demand in modern Europe. It is very important that this experience should be represented in Strasbourg in a real way in the largest religious community in Russia—the Russian Orthodox Church—and its experience in cooperation with various religions and cultures,” stressed the representative of the Patriarchate of Moscow in Strasbourg.

Igumen Phillip informs that the author of this project is an architect from St. Petersburg, Y.V. Kirs, who has also designed churches already built in the Republic of South Africa and the United Arab Emirates. He also noted that the Strasbourg church design is based upon that of the St. Nicolas Church on Valaam.

The chairman of the Council of Federation has supported the project and stressed its significance not only for Russian-speaking compatriots and Russian Orthodoxy, but for the whole Orthodox world as well, which, after this project comes to completion, will find its visible representation in Strasbourg.