Strengthening Ourselves Spiritually: On the Healing of the Bowed Woman

Metropolitan Hilarion (Alfeyev) | 07 December 2014
And He was teaching in one of the synagogues on the sabbath. And behold, there was a woman which had a spirit of infirmity eighteen years, and was bowed together, and could in no wise lift up herself. And when Jesus saw her, He called her to Him, and said unto her, Woman, thou are loosed from thy infirmity. And He laid His hands on her, and immediately she was made straight, and glorified God. And the ruler of the synagogue answered with indignation, because that Jesus had healed on the sabbath day, and said unto the people, There are six days in which men ought to work: in them therefore come and be healed, and not on the sabbath day. The Lord then answered him, and said, Thou hypocrite, doth not each one of you on the sabbath loose his ox or his ass from the stall, and lead him away to watering? And ought not this woman, being a daughter of Abraham, whom Satan hath bound, lo, these eighteen years, be loosed from this bond on the sabbath day? And when He had said these things, all His adversaries were ashamed: and all the people rejoiced for all the glorious things that were done by Him (Luke 13:10-17). 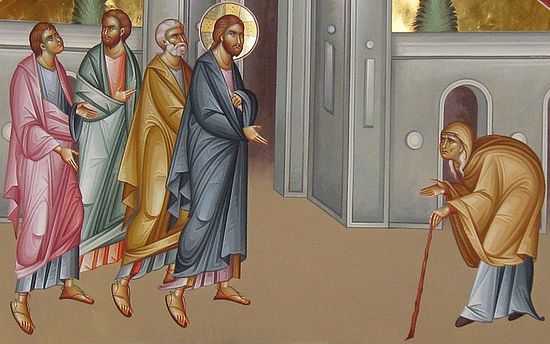 A woman who for eighteen years could not lift herself up was healed by the divine power of the Lord Savior. This incident, narrated by the Evangelist Luke, reminds us of the miraculous healing that takes place with every person who encounters Christ on his life’s path.

The life of many of us in this world is such that gradually, over the years, we bow down under the weight of the burden laid upon us. It can be the burden of earthly concerns, experiences, and intractable problems; it can be the cross that we carry on our shoulders: illness that befalls us, trials that overtake us; it can be sins with which we do not have the strength to cope. We bow down under the weight of all this.

Sometimes it seems to us that, apart from this difficult earthly situation in which we find ourselves, nothing more exists on earth. The bowed woman, until the Lord healed her, saw only the patch of ground beneath her feet. In just the same way, we often are incapable of seeing anything that is higher than us, or even that which is on the same level with us, but rather see only that which is under our feet. Bowed down to the earth, we do not see heaven. Being immersed in earthly affairs and concerns, we forget that, apart from that tiny parcel of land that has been given to us for an inheritance, there also exists something infinitely greater and more beautiful: an entire world with its expanses of earth and sea, the sky with its heavenly bodies and stars and, finally, the Heavenly Kingdom, to which we are all called, for a habitation has been prepared for each one of us therein.

Coming to church, we have the opportunity to come into contact with this higher, other reality in our own living experience. The Church helps us to be spiritually strengthened, to forget about the earth, and to remember heaven, turning us away from the material and the here and now, and joining us to the spiritual and the “there.”

By healing the bowed woman, the Lord Jesus Christ shows us what He awaits from each one of us. He awaits for us to stand before Him at our full height, that we should grow, in the words of the Apostle Paul, “unto the measure of the stature of the fulness of Christ” (Ephesians 4:13); that we should straighten up, stretch out our wings, and breathe deeply. The Lord wants us to remember our lofty and heavenly calling: to be children of God, to be inhabitants of the heavenly city, the Jerusalem on high.

People who are believers often become bowed down under the weight of their own sins. And it happens that they become inclined towards the ground under the weight of repentance for the sins they have committed. Their experience of repentance for what they have done does not give them strength towards correction, it does not inspire them towards the ascetic labor of moral self-perfection, to the fulfillment of the Divine commandments, and to active virtue, but only plunges them into even greater despondency than that which they had experienced before they acknowledged their sins.

In such “repentance” there lies a spiritual error. The Lord does not want us to become bowed down under the weight of the feeling of our own unworthiness. We approach the Holy Chalice and confess sincerely and from all our hearts the faith that the Lord came “to save sinners, of whom I am the chief.” If we do not have such a feeling, we cannot worthily receive Communion; and if even one person seems worse than ourselves, that means that we are not yet ripe for an encounter with Christ. But by recognizing ourselves as sinners, by seeing the whole abyss of evil in which we find ourselves, we should not therefore fall into despondency or despair. We should remember that, as St. Isaac the Syrian said, no human sin – even the most severe – can overpower the mercy of God. And all our sins taken together, according to the words of St. Isaac, are like a handful of sand tossed into the ocean of God’s mercy, where it dissolves and disappears without a trace.

The Church gives us the opportunity to focus not on ourselves, but on God, to redirect our attention away from ourselves and our own life situation, to the Heavenly Kingdom, with which we can commune. In spite of all our sins and on our inability to rise to the level at which a Christian should live; in spite of the fact that we are incapable of fulfilling Christ’s commandments that, so it seems to us, exceed our human strength – in spite of all of this, we still have the ability to be constantly spiritually renewed here, in the Church, through Communion of the Body and Blood of Christ, through prayer, and through the divine services.

The Church give us new strength for us to grow spiritually, to ascend from “strength to strength,” becoming more and more straightened out, and becoming all the less mindful of earth and appealing more to heaven. The closer man is to God, the more he feels his own sinfulness, but he simultaneously grows towards and feels God’s closeness. And then repentance becomes joyful, like recovery after a long illness, as a straightening up after many years of being abnormally bowed down.

Let us go along with Christ, and along with one another, on the straight path, not stopping for a day, an hour, or a minute. Let us ascend to the habitations of the Heavenly Kingdom, where a place awaits each one of us, if only we would be worthy before God.