He Stretches Out His Hand To Us 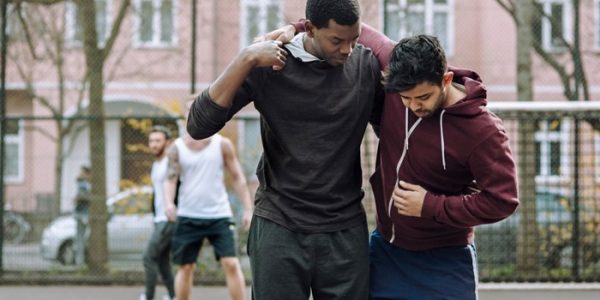 In today’s gospel reading we are met face to face with two terribly difficult situations. In one, we have a woman who has been really very sick for about 12 years. She has a serious problem with bleeding which makes her weak and sick and on top of all of that, it also means that she is always considered unclean according to the Jewish law. This means that she could not approach or touch any holy thing. In a way this added much more to her suffering and affliction.

The next situation that we find in the gospel reading is even more difficult than the first. We also encounter Jairus, the ruler of the synagogue and we hear that his only daughter, at the tender age of 12 has fallen seriously ill. It is not long before everyone is alerted to the unbearably difficult news that comes to them as they are traveling towards the home of Jairus, as a servant from his house comes to him and says “Your daughter is dead; do not trouble the Teacher any more.”

Every one of us has suffered the loss of loved ones. Every one of us has been sick or known others who were chronically sick. Many of us have known the extreme pain that comes with the loss of young children. It is an unbearable loss. We have a hard time trying to understand the grief that a parent must endure in such a situation. To all of this we are sometimes inclined to think to ourselves “This is not fair.” Sometimes we are even bolder than that and we say “Why did God let this happen?” or we say “Why does a good God allow such evil and suffering?”

One of the conversations that sometimes happens in our home sound a bit like this, “Daddy, that is not fair!” To which I often reply “life is not fair.” One of the facts of our Christian worldview is the idea that the sin of Adam and Eve caused corruption and death to spread over the whole world and especially over the human race. We can say that life in the beginning was fair, but that the actions of our rebellion against God, changed our situation completely. When humans chose to go their own way and rebel against God, they essentially drifted away from health, sanity and life and towards sickness, insanity and death. This sickness, insanity and death did not stay isolated but spread like wildfire uncontrollably, burning everything that came into contact with it.

God allowed this to happen because He does not impose Himself upon Adam and Eve, or upon us. He allows each man to be a kind of Adam or Eve. He allows each one to follow or reject Him. His respect for our freedom is a sign of deep love for us. But with that freedom, came consequences based on our actions. But God in His wisdom knew from the beginning that our freedom to sin would actually cause great pain and would even lead to the most unjust and unfair event in the history of the world; to the betrayal and murder of His Only Begotten Son. So when we say that life is not fair, we can look to the cross and understand that God knows this much more than we know it.

But through this greatest injustice and cruelty, through the crucifixion, Christ our God could penetrate our human frailty and our sickness and He could heal them from within. As St. Gregory the Theologian writes “What is not assumed is not healed. But that which is united to His godhead is also saved” Christ our God assumed our humanity and by doing so, He shared His divinity with us and conquered the things that we could not conquer on our own, sin and death. He conquered them so that He could once again restore each of us to life and health and holiness.

The healing of the woman with an issue of blood seemed impossible to her. She had spent all of her money looking for cures. She had lost all hope. It’s possible that some of us feel like this woman. We feel that we have lost hope. Perhaps it is because of our own physical illness, but perhaps it is due to a mental illness or a breakdown in an important relationship. There are any number of difficult situations that can tempt us to think “life is not fair.” There are any number of situations that can make us think that we might never get through our trying times. It is at that very moment in life that everyone must make a choice just as this poor, sick woman had to make a choice. You can allow the circumstances of life to defeat you or you can reach out to God with every bit of strength that still remains within you. That is what it is to have faith, to believe in what we cannot see clearly with our eyes. Hoping against hope, with no idea of what would happen, this woman reached out her hand in faith and immediately she received health and peace from the source of healing.

The family of Jairus was shaken to the core. The cloud of death had overtaken their home and had laid hold of their beloved daughter. But God was watching, and God knew of their profound loss. We might find it hard to cope with such loss, yet our God also knows our losses. But unlike the woman who reached out to Christ for healing, death had made it impossible for the little girl to reach out to her Master and Lord. But just as the woman had earlier stretched out her hand to receive healing, Our Lord Jesus stretched out His hand to give healing to the girl who could not longer reach out to Him. What death made impossible, the Lord made possible. He does this for each and every one of us. He is prepared to reach out His hand to pull us up out of the depths, as we see pictured in the icon of the harrowing of Hades, with Adam and Eve.

The message is clear. Even in extreme difficulties and the various sufferings of life, we should not lose hope. Even in death, we are not beyond His reach. God has conquered suffering and He has conquered death because He passed through them both. Let us trust that the God who passed through them can also provide us a way through them, granting both physical and spiritual resurrection, both now and in the coming age. Glory be to God forever AMEN.

Why Do We Call The Priest “Father”?

One of the most common questions that comes up when someone comes to the Orthodox Church, especially those…