Sts. Constantine and Helen in Brooklyn: 100 Years of Love and Service 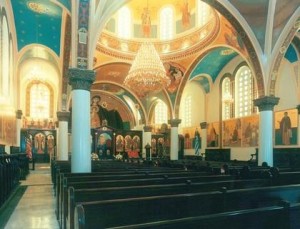 When a parish reaches the 100-year milestone, the word “anniversary” does not do justice to the century-long existence: not only of an institution but also of a beautiful extended family. On April 12 the parish of Sts. Constantine and Helen, whose home is the majestic, beautifully-renovated Byzantine domed basilica in downtown Brooklyn, begins its year-long celebration with a “Homecoming Weekend.” The first day has a youth focus. After Salutations to the Theotokos, the parish GOYA and the chapters of their sister parishes are invited to a Lenten meal. On April 13 the community welcomes back one of its most beloved and revered pastors, Rev. Fr. Alkiviadis Calivas, and hosts a special tribute the parish’s Boy Scout Troop 63. Calivas will preside over Great Vespers that will feature the Byzantine Choir of Holy Cross Theological Seminary at 6:30PM followed by a lenten meal in the Church hall.