Sunday before the Exaltation of the Cross

Source: Library of Metropolitan Anthony of Sourozh
Indeed, for us, the story of the Crucifixion is a story which we have heard so often — most of us since our childhood, or at least when we were young. There was a moment when, with a child's imagination, we responded with deep emotion, and then we became, as we all become, immune to this emotion — it has become a fact of our faith, it has ceased to be an event of our life ...
Metropolitan Anthony of Sourozh | 26 September 2008 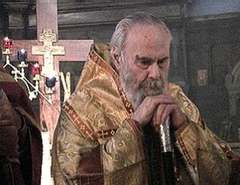 In his Epistle to the Galatians (VI:14) Saint Paul says that by the Cross of Christ the world is crucified unto him, and he is crucified unto the world. What does this mean? Paul was not physically crucified, neither was the world; but the image in the ancient language is a great deal clearer. In a crucifixion the two arms of the victim were spread on one side and the other, violently separated and nailed to the cross, so that they could never, never meet again. And this is what Paul speaks about. Through the Cross of Christ the world has been torn away from him and become totally alien, a world which he can no longer reach, which he does not want to reach any more, a world that is not only taken away from him, but which he rejects. And in the same way he has become alien to the world, because the world can no longer accept him on the new terms, Christ’s terms, by which he lives.

We should reflect upon ourselves when we hear such words and see such images. Paul was an enemy of Christ; Paul set out from Jerusalem to Damascus in order to annihilate His disciples as liars, as blasphemers, and on the way he met Christ face to face. At that moment Christ became his Lord, became his God, and there was nothing apart from Christ that mattered to him. His heart was vast enough, he was great enough to receive the message and to respond to it with all his being, all his life, all that would happen to him.

Indeed, for us, the story of the Crucifixion is a story which we have heard so often — most of us since our childhood, or at least when we were young. There was a moment when, with a child’s imagination, we responded with deep emotion, and then we became, as we all become, immune to this emotion — it has become a fact of our faith, it has ceased to be an event of our life … Saint Paul said in another passage that for him, Christ is all of his life; all, because if He was what He was — what could be put side by side with it? What could be compared? Think a moment, what would happen if someone whom you love, or you admire, fell victim to the violence, the murderous cruelty of other people because he stood for something that mattered to him more than life, perhaps your life, to save you, personally. Could you ever return to those things which caused his death? Could you, could any of us, play with life? Could we live foolishly? Could we choose evil, however we try to disguise it in one way or another? If we knew that because we had made this choice — perhaps a small choice, but a murderous one — a beloved person, or simply a person, had had to die because of it? A drunken driver is an example. But there are so many ways in which we are destructive of one another…

And there are heroic ways in which people give their lives for others because the other one was foolish; not even so sinful as it appeared to him or her — just foolish! But this foolishness meant death.

Where do we stand? Can any one of us say earnestly the words which Paul spoke here, in this Epistle, or in another passage when he says that for him life is Christ and Christ is life, that he longs to die to be with Him, that life on earth is separation and that his only longing is to be reunited with Him? [Philippians I:21].

Let us reflect on this. These words of the Scriptures do not stand before us as an accusation, a condemnation, but they are a call; Paul says, ‘I know what it means to have discovered eternal life; I know what it means to have discovered Christ, to discover everything that in life that has a value in contrast to all the things which we serve slavishly. Discover them, he would say to us, go back into your soul, into your past, to the first moment when Christ entered into your life, into your heart, the moment of wonder, the moment of joy, the moment of liberation, and then live by it, leaving aside all that is dark, all that is deadly, lifeless, ugly! Choose for light, choose for life, choose for joy — all these things are contained in the Name of God and in the love of God in Christ. Amen.