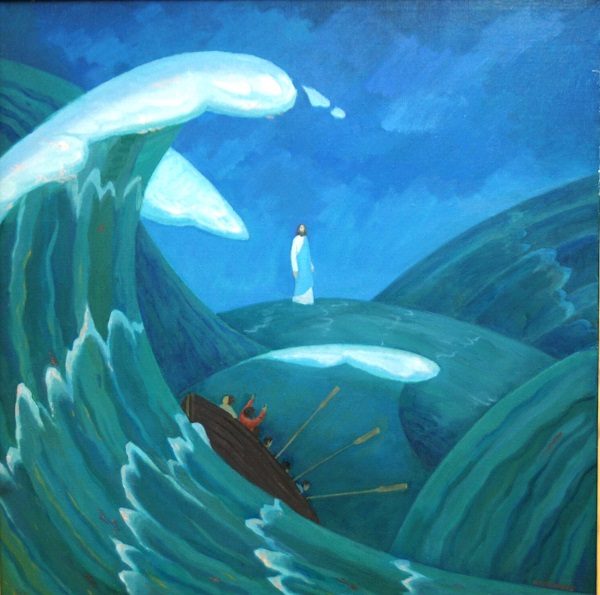 Think, I am not an unbeliever, on the contrary, but I believe passionately in the communion with God which is offered us in prayer, in a life worthy of His holiness and His love for us, of all He gives us; but also we are merged and we are part and parcel of a fallen world and it is in this turmoil that we must find our way. Remember in the Gospel the story of St. Peter drowning while he was walking towards Christ. The disciples have left one side of the sea of Galilee and were moving to the other side. They were almost by the shore but they were tossed by a storm and of a sudden at a very centre of the storm, at the point of equipoise of all the violence of it they saw Christ walking on the sea. They cried for fear because they thought it was a ghost. And Christ said: “Don’t fear, it is I”. And then Peter whom we see always ready to move in an élan, said: “Let me come to You if it is truly You”. And Christ said: “Come”. And as long as Peter was looking at nothing but Christ he could walk on the seas. But of a sudden he became aware that he was no longer walking on solid ground, that water was under his feet, that he could drown at every moment and the moment he turned towards himself he began to drown but at that moment the Lord Jesus Christ took him by the hand, saved his life and he discovered that they were all in the boat and at the shore. That is the way in which mankind and each of us has got to proceed: we are like Peter. There are moments when we can go Godwards, not thinking of anything else, not even ourselves, there are other moments when we start and remember the dangers of the world and begin to drown. That happens in major ways but it happens also in very simple ways when someone gets into despair, feels there is no hope, life is so hard, life is so incredibly cruel. How to live? And then of a sudden God enters into our life.

If I may say something which probably is irrelevant. I belong to a generation that has known the First World War and the revolution and the emigration and number of hardships attached to these events and when I was a boy I had formed the impression that the world of men was like a jungle, that I was surrounded by wild beasts, that the only way of survival was to be totally insensitive and capable of fighting or ready to be devout or destroyed. And at certain turn of my life, I was fourteen then, Christ entered into it, and I remember that in a first reading of the Gospel I opened it on a passage from St. Mathew that was saying that God shines His light on the good and the evil, loves the good and the evil, the ones with joy, the other ones with crucifixion. And I remember I sat back and thought: “I want to be with God and so even if I am burnt alive I will love the people who do that because I want to be with God”.

And I think this is the position in which we all are: through science, through literature, through art, through music, through human relationship, in peace and in war, in health and sickness, we are walking on this sea on which St. Peter walked, and at time we walk because we think of the God of harmony, at times we begin to drown because we remember ourselves, our frailty, the danger in which we are and at that moment it is Christ Who takes our hand and we found ourselves safely on the shore. 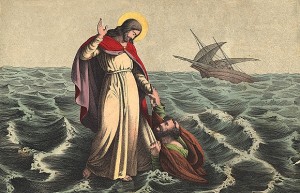 The Calmer of Storms: Commentary on…
Archpriest Alexander Shargunov

And straightway Jesus constrained His disciples to get into a ship, and to go before Him…