Source: OCA
Natalya Mihailova | 05 November 2015
On the weekend of October 31–November 1, 2015, the community of St. Vladimir’s Orthodox Theological Seminary [SVOTS] gathered to honor its heavenly patron, the Great and Holy Prince Vladimir, by commemorating the translation of his holy relics to Three Hierarchs Chapel. 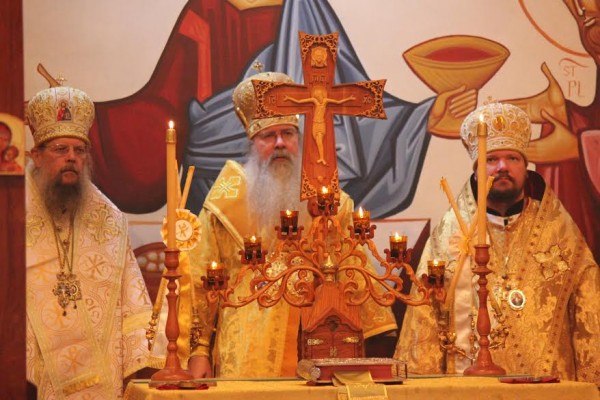 In November 2013, a delegation from the Ukrainian Orthodox Church, Moscow Patriarchate, led by His Eminence, Metropolitan Philip of Poltava and Myrhorod, presented the community with the relics of Saint Vladimir and a rare Book of the Gospels. The precious gifts were presented on behalf of His Beatitude, Metropolitan Volodymyr of Kyiv and All Ukraine, who reposed in 2014.

“When Saint Vladimir’s Seminary was founded in 1938, the decision was made to give our seminary a missionary saint as its patron,” said seminary Chancellor/CEO Archpriest Dr. Chad Hatfield.  “The presence of Saint Vladimir’s relics are a constant reminder that we too are called to carry out the Great Commission.”

Vladimir Sviatoslavich the Great was the prince of Novgorod, the grand prince of Kyiv and ruler of Kievan Rus’ from 980 to July 15, 1015.  Saint Vladimir introduced Orthodox Christianity to Kyivan Rus’ in the year 988.  Orthodox Christians around the world have organized events in 2015 to commemorate the 1000th year anniversary of the blessed saint’s repose.

“It is a great blessing to have relics of our patron saint, and the ‘transfer’ of the relics has given us a wonderful opportunity to celebrate this feast annually and combine it with an early Thanksgiving community meal,” remarked seminary Dean Archpriest Dr. John Behr. “The presence of Saint Vladimir amongst us constantly reminds us of the missionary purpose and character of all that we do together, on behalf of the Church and for the Church.”

The weekend’s events began with the celebration of a beautiful Vigil on Saturday evening, sung antiphonally by the Saint Damascene and Saint Cassia chapel choirs. Metropolitan Tikhon, Primate of the Orthodox Church in America and President of the seminary, presided at the celebration of the Divine Liturgy on Sunday morning.  Concelebrating were His Grace, Bishop Alexander of Toledo and the Bulgarian Diocese of the OCA, and His Grace, Bishop John of Naro-Fominsk and Administrator of the Patriarchal Parishes in the USA.

The community continued its joyous celebration that evening with a cherished—and delicious—Saint Vladimir’s tradition: a pre-Nativity Fast Thanksgiving dinner.  Seminarians, faculty, and staff, and their families enjoyed a delightful feast prepared by Chef Nat Fasciani.

Most viewed articles
Seven Lessons for the New Year from St. Seraphim of Sarov198
The Perfectionist120
New Jersey Governor Signs Bill Legalizing Abortion Up To Moment of Birth83
140th anniversary of repose of St Antipas the Athonite of Calapodești celebrated in Roman56
Metropolitan Hilarion Celebrates the 20th Anniversary of His Episcopal Consecration47
The Way of Christ Is The Way of Love47
Most popular authors
Priest Luke A. Veronis198
Protopresbyter Themistoklis Mourtzanos120
Ryan Foley83
Aurelian Iftimiu56
Pravmir.com team47
Fr. Theodore Stylianopoulos47