Source: ITAR-TASS News Agency
Ambassador Helg said in a letter to the chairman of the department Metropolitan Hillarion that the Russian Church was playing a noble role in the efforts to establish a durable peace in Ukraine.
Natalya Mihailova | 03 July 2014
MOSCOW, July 02. /ITAR-TASS/. Swiss Ambassador in Moscow, Pierre Helg, has thanked the Russian Orthodox Church for assistance in freeing observers of the Organization for Security and Co-operation in Europe (OSCE) in Ukraine, Moscow Patriarchate’s department for external Church relations said in a report on its website. 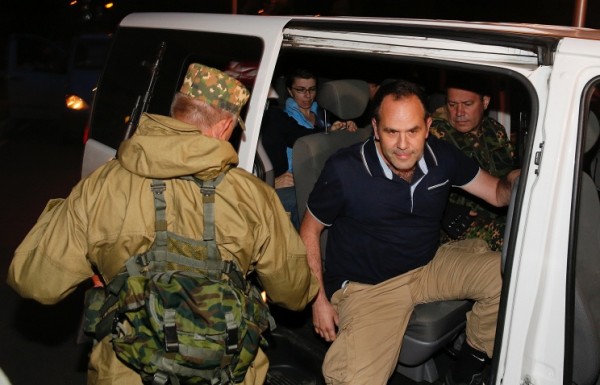 Ambassador Helg said in a letter to the chairman of the department, Metropolitan Hillarion that the Russian Church was playing a noble role in the efforts to establish a durable and just peace in Ukraine.

He also expressed gratitude to the Patriarch of Moscow and all Russia, Kirill I, and Metropolitan Mercurio who had taken on the role of a contact person in that important case.

International observer were set free one of these days without an prior conditions and the Russian Foreign Ministry said their release had become possible to a big degree owing to Patriarch Kirill’s personal appeal for their release.