On March 15, 2013, the Holy Synod of the Ukrainian Orthodox Church met for a regular session at the synodal hall of the Kiev Laura of the Assumption.

It was chaired by His Beatitude Vladimir, Metropolitan of Kiev and All Ukraine. 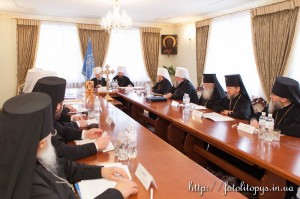 Photo from the website of the Ukrainian Orthodox Church

The Synod approved the membership of the organizing committee for the celebrations marking the 1025th anniversary of the Baptism of Russia. It will be headed by Metropolitan Antony of Borispol, chancellor of the UOC, and the order of divine services to be held on the festive days of July 27 and 28, 2013. The UOC diocesan bishops were instructed to hold festivities in their dioceses. The Synod also established an award ‘The 1025th Anniversary of the Baptism of Kievan Rus’.

It was resolved that Metropolitan Vladimir send a message to Ukraine’s President Victor Yanukovich, Prime Minister N. Azarov and Supreme Rada Speaker V. Rybak, asking them to prevent Bill No. 2342 from being adopted as it extends the notion of discrimination to make it possible to interpret as discrimination the Church’s traditional negative attitude to homosexuality.

The Synod adopted a concept of higher theological education in the Ukrainian Orthodox Church.

The Synod also made some decision concerning the life of monasteries and Synodal departments of the Ukrainian Orthodox Church.