Synod of the Ukrainian Orthodox Church Holds Its Session

Natalya Mihailova | 05 April 2017
On 4 April 2017, a regular session of the Synod of the Ukrainian Orthodox Church took place at the Laura of the Caves in Kiev. 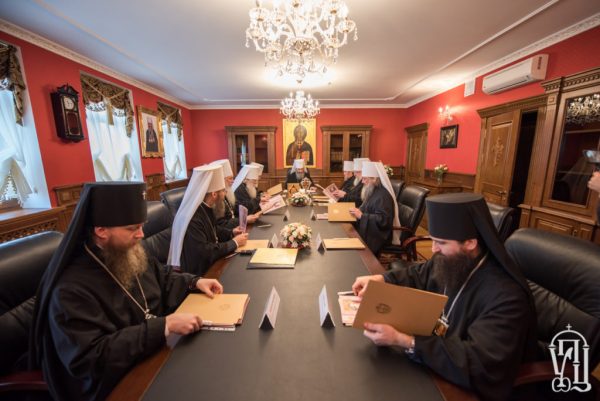 The session was chaired by His Beatitude Metropolitan Onufry of Kiev and All Ukraine, who informed members of the Synod about the last events of church life.

The Synod took notice of the letter of Archimandrite Evlogy, hegumen of St. Panteleimon’s monastery on Mount Athos disclosing the decision of the elders to temporarily suspend the activity of the metochion in Kiev.

The Order of St. Job, hegumen of Pochaev, was instituted, in three classes.

Due to the adoption of legislation on the mentorship for children living in orphanages and neglected children, Archbishop Panteleimon of Rovenki and Sverdlovsk, head of the Synodal Department for Family, was charged to present a concept of the Ukrainian Orthodox Church’s mentorship programme for orphans and neglected children to Metropolitan Onufry.

The reshaped membership of the Synodal Theological Commission was approved with Metropolitan Avgustin of Belaya Tserkov and Boguslav as its head. Also approved were amendments and additions to the Statute of Synodal Department for Youth Affairs.

Certain administrative decisions were taken on the ordering of life of dioceses and monasteries of the Ukrainian Orthodox Church.