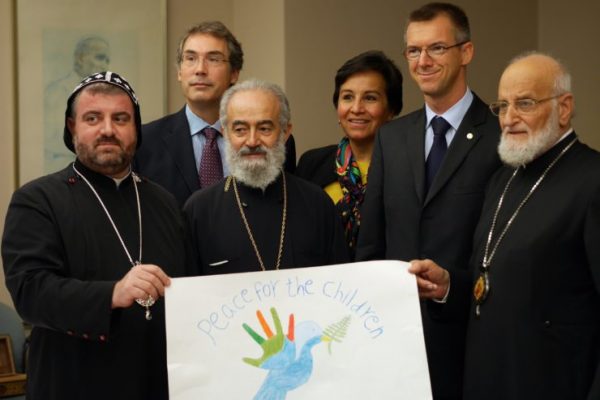 They are carrying close to a million Syrian school children’s signatures on a petition for peace in their country as well as countless drawings expressing the youngsters’ longing for peace, which were formally presented in the Belgian capital to the President of the European Commission, Jean Claude Juncker, and the President of the European Parliament, Martin Schulz.

The prelates’ mission is the fruit of the February 2016 joint declaration of Pope Francis and Russian Orthodox Patriarch Kirill, which called on Catholic and Orthodox Christians to speak out in unison in calling for peace in Syria and for support of persecuted Christians.

Father Andrzej Halemba, head of the Middle East section of international Catholic charity Aid to the Church In Need—which sponsored the prelates’ mission as well as last week’s gathering of children’s signatures—said: “The more we Christians are united in our defense of peace and in our support, in particular of children in need, the stronger our voice and the more effective our efforts.”