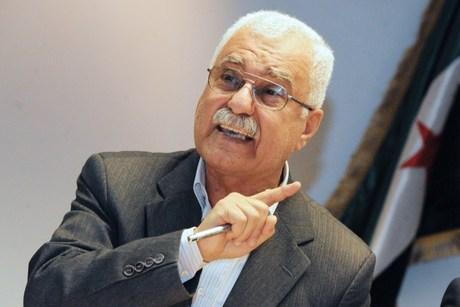 Interim opposition chief George Sabra was Tuesday working to secure the release of two bishops kidnapped in a north Syria village, a Greek official said, as a fresh wave of violence hit the country.

On the diplomatic front, U.S. Secretary of State John Kerry was attending his first NATO foreign ministers in Brussels on Tuesday, with Syria the focus, while U.N. leader Ban Ki-moon urged an end to arms supplies to Syria’s rival sides.

Greek Foreign Minister Dimitris Avramopoulos has spoken by phone to Sabra, newly-appointed head of the opposition Syrian National Coalition, who said he would act immediately to locate and liberate the bishops, the spokesman said.

SANA had reported the pair abducted while conducting “humanitarian operations” in Kafr Dael village in Syria’s northern province of Aleppo.

“Terrorists intercepted the bishops’ car in Kafr Dael village, took the driver out of the car and kidnapped the bishops,” it said.

Christian residents of Aleppo reached by Agence France Presse said Ibrahim set out in his car to pick up Boulos Yaziji (Bishop Paul) from the Bab al-Hawa crossing on the Turkish border, which is under rebel control.

The car was intercepted on the way back by gunmen who kidnapped the bishops and killed their driver, the residents said on condition of anonymity.

Kidnappings have become increasingly prevalent in Syria as law and order has broken down.

“Christians are sometimes more targeted by kidnappers since they have not organized themselves into militias under a tribal system,” Antoine Audo, the Chaldean bishop of Aleppo, said in an interview with AFP earlier this year.

But the Syrian opposition also includes prominent Christian members, including Sabra, a long-time dissident who was named interim head of the main opposition Coalition on Monday.