Source: Aid to the Church in Need
Natalya Mihailova | 03 May 2017
On Tuesday 25th April, in Damascus, Melkite Catholic Patriarch Gregory III Laham of Antioch finally celebrated the funeral Mass for five Syrian Christians who had been abducted in 2013 by Islamist extremist rebels in the city of Maaloula. Following the Mass, their remains were finally laid to rest in this majority Christian city from which they had originated. 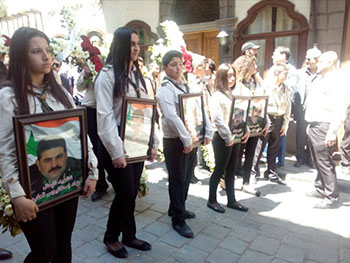 According to information given to the Catholic charity Aid to the Church in Need (ACN) by sources within the Melkite Catholic patriarchate, the unidentified remains of five bodies were discovered three months ago in a cave in the Lebanese region of Irsal (Aarsal), on the frontier with Syria. After the necessary investigations and tests the remains were finally identified as belonging to 5 of the 6 individuals abducted on 7th September 2013 by Jabhat al-Nusra, one of the rebel factions involved in the Syrian conflict. There is still no news concerning the sixth person, who was abducted at the same time, again according to the same sources. The Lebanese authorities formally handed over the remains to the Syrian authorities in the frontier town of Jdeidet Yabous, from where they were transferred to Bab Touma, a predominantly Christian suburb of the Syrian capital Damascus, where the funeral was held. All five individuals were Christians, four of them belonging to the Greek-Catholic Church and one to the Greek Orthodox Church.

In his homily, His Beatitude Gregory III Laham spoke of the strength of a love that is stronger than death: “There is no greater love than to give oneself for his loved ones! Jesus Christ gave up his life for us; our martyrs gave up their lives for the love of their God and Lord Jesus Christ who died on the cross and came back to life for us.”

At the same time the Patriarch emphasised the fortitude in faith of “our five martyrs” (Ghassan Shanis, Dawoud Milaneh, Chadi Taalab, Atef Kalloumeh, Jihad Taalab) who now “join the martyrs of 7th September 2013 (Michael Taalab, Antoun Taalab, and Sarkis Zakhm), who were murdered after they declared their faith in Jesus Christ, refusing to deny their faith to protect their lives.” Referring to the sixth victim, Patriarch Gregory added, “We also remember our beloved Moussa Shanis, who is still missing.” And he included in his prayers all the Christians murdered for their faith in the Middle East in recent years: “We remember all our martyrs, the Christian martyrs from all over Syria and especially in Homs, Aleppo, Damascus and Hauran. And we likewise remember the martyrs in Cairo, Alexandria, Baghdad, Mosul and the plains of Nineveh.”

Speaking on the telephone to ACN, Father Toufic Eid, the parish priest of Maaloula, described the calm and peaceful atmosphere among those who accompanied the funeral cortege from Damascus to Maaloula: “In the Syrian popular tradition the people sing and shout to express their sorrow, but on this occasion the mourners refrained from doing this and a profound, respectful and painful silence accompanied the coffins as they were carried on the shoulders of family members and friends.”

Maaloula, one of the last communities in the world where Aramaic is still spoken as the main language, is located around 57 kilometres (40 miles) from Damascus. Between September 2013 and 20th April 2014 it was besieged, attacked and finally captured and occupied by rebel Syrian factions. “Al Nusra, ISIS, Syrian Liberation Front – you can call them what you like, since they are all the same; the names change according to who is financing them at that particular moment”, says Father Toufic ironically. “We can say that it was after the liberation of Maaloula by government forces on 20th April 2014 that contact was lost with the abducted Christians. We do not know what happened to them after that date; for now we have no exact information as to when they were murdered.”

The same family name, Taalab, appears four times on the list of martyrs named by Patriarch Gregory during his funeral homily: Chadi, Jihad, Michael and Antoun. Father Toufic confirmed that they all belong to the same family. “Sanna, who lost her husband Michael and a nephew Antoun in September 2013, is now weeping for her son Chadi and her brother Jihad. It is hard; these events have forced the people of Maaloula to relive all the horrors of that time, and provoked grief and pain, but also anger.”

Asked how one can respond in a Christian manner to this natural feeling, Father Toufic replied, “How to help people to forgive? Forgiveness is an integral part of our faith, yet it is so difficult. It takes time. And I tell them that it is not for the good of others, for the good of the other person. We have to walk the path of forgiveness for our own good, for our relationship with God. We have to forgive, because if we do not, we make a pact with evil, our heart fills with hatred and becomes blinded. Evil seeks to prevail within our hearts, and we have to fight against this.” Another and different issue for the priest is the matter of reconciliation. “This is also important, but for reconciliation you need both parties; one has to forgive, but the other has to feel repentance and acknowledge responsibility for his actions. If not, then reconciliation is not possible.”

For 6 years a terrible war has been devastating Syria. 6.3 million displaced and 13.5 million people are now dependent on humanitarian aid. This is roughly two thirds of the country’s population. Besides, around 5 million people are officially registered as refugees in neighbouring countries. Many of the younger children have known nothing but war and exile from their homes.

The Melkite Catholic patriarchate in Damascus has asked ACN to help in providing food for around 1,500 refugee families living in rural areas round about the capital Damascus. The idea is to provide basic necessities, such as milk for children, lentils, sugar, tea, oil canned goods and other basic necessities for the next three months. 15 volunteer helpers will distribute the food from three centres.