Source: Montreal Gazette
Kate Sheridan | 06 September 2015
The head of the Syriac Orthodox Church, Mor Ignatius Aphrem II, called for the international community to work together toward a peaceful resolution to the conflict in Syria at a press conference in Laval on Friday. 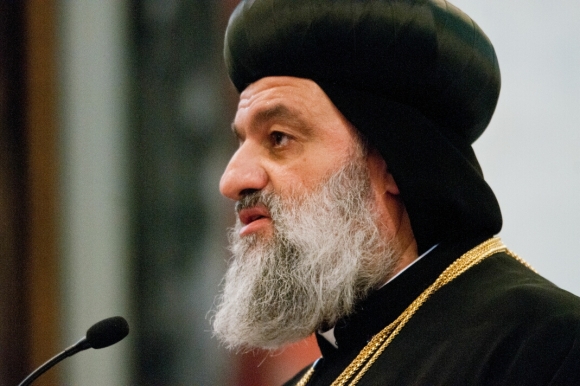 He said everyone was shocked by the photo of Alan Kurdi, a 3-year-old Syrian boy who was photographed lying lifeless on a beach in Turkey. “Our thoughts go out to his family and to the families of all the victims. I would like to say that Alan, as horrible as his story is, there are thousands of people like him (who drowned) and there are thousands of kids like him, but their stories were not told.”

Alan, along with his 5-year-old brother, Ghalib, and his mother, Rehanna, drowned when the boat they were travelling in to Greece sank. The three were buried in their hometown of Kobane in Syria on Friday, according to the Associated Press.

The photo brought the Syrian refugee crisis to the forefront of the Canadian consciousness this week because the child’s uncle had applied to be sponsored and come to Canada, but the forms were returned because they were incomplete. Agencies that support refugees have been feeling the effect.

“We’ve been getting all kinds of emails and requests,” said Janet Dench, the executive director of the Canadian Council for Refugees, a Montreal-based national umbrella organization for refugee assistance groups. “I know some of our members have been talking about how they’ve been receiving lots of calls.”

“It’s been a long time since I’ve seen such a level of interest,” she said. “We’ve been scratching our heads for a long time. We’ve been quite discouraged by the lack of popular reaction to the scale of the crisis. But now, you feel like people are doing what we expect them to do, which is to say that this is intolerable and we want action.”

Ignatius Aphrem II said average Canadians should focus on the people who are trying to stay in their communities by helping groups respond to their needs, including basic necessities like food, clothing and health care.

“They can also keep the pressure on their elected officials, on the government, to be more attentive and active in the international coalition and community, to try and bring a solution to the issues in Syria and Iraq,” he said.

While the church leader called on the government to do more, he also was “saddened by seeing some politicians using the tragedy, especially the tragedy of this little kid, for their election campaigns, to attack each other.”

The Canadian government promised in January to accept 10,000 Syrian refugees over three years. Premier Phillipe Couillard said Thursday 643 Syrians have come to Quebec since the beginning of the year, according to Presse Canadienne. Couillard said he expects 1,900 to arrive by the end of 2015, and the province was ready to host “hundreds or thousands” of new refugees.

When asked about the bombing campaign, the patriarch said the immediate concern is the refugees who were dying en route. “But if you want to treat an issue, you have to treat the cause of it, and that means you have to be more serious about going after these terrorist groups.”

The press conference was the final stop in the Patriarch of Antioch and all the East and Supreme Head of the Universal Syriac Orthodox Church’s tour of Canada, which began in August. Ignatius Aphrem II held a mass and met with the local community in Sherbrooke on Thursday.

“I thought to myself, what has changed in the last 100 years? Nothing has changed,” he said. “(The first group) came here because they were persecuted, and now these newcomers are also here for the same reason. Is the world getting any better, I was asking myself.”

Christians in Syria face persecution from the Islamic State and other groups, he said. Christians in cities where IS is present are not allowed to pray in public or where someone might hear them pray. They also are forbidden from displaying religious symbols or building churches. Finally, families must pay a tax to continue to live in the city.

“What has happened in the last few years, specifically in Syria but also in Iraq, has put our faith to the test and has put our existence at stake,” Ignatius Aphrem II said. “(The tour) is also an occasion for me to highlight the plight of our people in Syria, and the need for peace, for our people to be able to lead a normal life.”