Syriac Patriarch thanks Pope for “courageously” speaking of the Armenian Genocide

Source: Public Radio of Armenia
Natalya Mihailova | 22 June 2015
Pope Francis and the patriarch of the Syriac Orthodox Church of Antioch expressed their desire to work toward full communion of the two churches, according to the National Catholic Reporter. 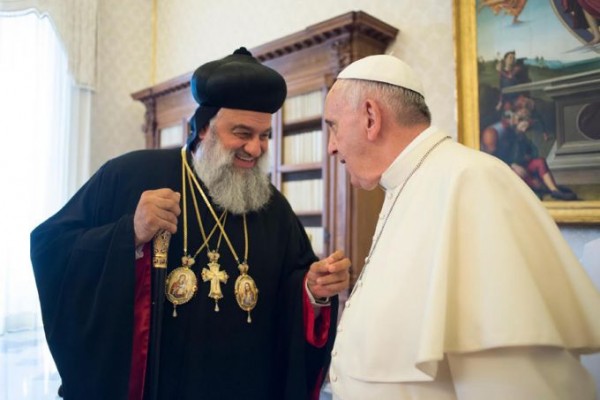 The Pope met with Patriarch Ignatius Aphrem II at the Vatican Friday. This was Aphrem’s first official visit with Francis. The two church leaders spoke privately, after which each gave a public discourse.

“We express our desire and readiness to look for new ways that will bring our churches even closer to each other, paving the way for Antioch and Rome, the only two apostolic sees where St. Peter preached, to establish full communion,” Aphrem said.

The patriarch also expressed his church’s readiness to come to an agreement to celebrate Easter on a common date. He said the Holy Synod of Antioch, motivated by the Second Vatican Council, adopted a resolution in 1981, expressing “the eagerness of our church” to celebrate Easter “on a fixed Sunday in April” in common with other Christian churches.

The celebration of Easter “on two different dates is a source of great discomfort and weakens the common witness of the church in the world,” he said, thanking Francis for recently “considering to take the initiative to lead the efforts on this matter.”

The patriarch also thanked Francis for “courageously” speaking of the Armenian genocide and “opening the way for others to do the same.” The patriarch said about 500,000 Syriac Orthodox died in the 1915 genocide, for which the community continues to seek healing and reconciliation.

In addition, he noted the loss of life of Christians and others in the ongoing conflict in the Middle East, as well as the high number of refugees and the destruction of numerous religious buildings and monuments. He thanked Francis for his prayers for the suffering Christians but urged the Vatican to engage in more diplomatic activity toward peace in the region.