Syrian Bishop Describes ‘Mortal Threat’ of ‘Extinction’ for His Community

The Chaldean Catholic bishop in Aleppo penned an emotional op-ed on Sunday describing the “mortal threat” to Christianity he says his country, now ravaged by three years of civil war, faces. 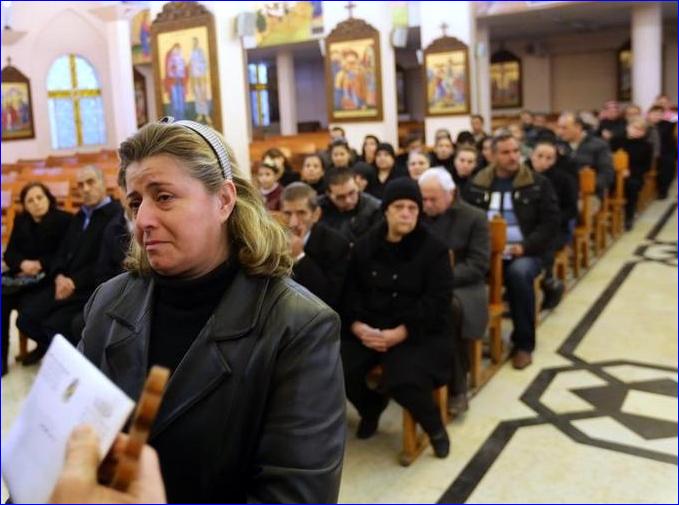 Syrian people from the Christian town of Maalula, a symbol of the ancient Christian presence in Syria which is currently under control of Syrian rebels, including jihadist groups, attend a mass service at the Saint Joseph church on December 18, 2013 in Damascus (Photo: Louai Beshara/AFP/Getty).

“We Christians live in fear in Syria,” Bishop Antoine Audo wrote in the British newspaper the Sunday Telegraph. “Our faith is under mortal threat, in danger of being driven into extinction, the same pattern we have seen in neighboring Iraq.”

He described what he expected the scene would look like this first Sunday of Lent. While churches around the world would be crowded, in his country “where St. Paul found his faith, many churches stand empty, targets for bombardment and desecration.”

“Aleppo, where I have been bishop for 25 years, is devastated. We have become accustomed to the daily dose of death and destruction, but living in such uncertainty and fear exhausts the body and the mind,” Audo wrote.

Though Aleppo has 45 churches and “Syria was one of the last remaining strongholds for Christianity in the Middle East,” the bishop explained that most Christians who can afford to have left Syria.

Besides the fear of bombs, unemployment, lack of food and electricity compound the worries for those who have remained.

On a personal note, the bishop said, “I have to be careful walking around the city because of the risk of snipers and kidnappings” as two priests were kidnapped on the road from Aleppo to Damascus.

“People fear for my safety and tell me to discard my bishop’s robes or hide away entirely,” he wrote. “But I cannot work unless I am in the streets to understand the situation and the suffering of the people. I am sustained by the daily acts of solidarity from my brothers and sisters around the world.”

He wrote that “as I walk through the dust and the rubble, I am not afraid…I have faith in God’s protection, hope for our future, and my love of this country and all its peoples will outlast this war.”

Besides his work as bishop of Aleppo, Audo heads the Catholic aid charity Caritas which coordinates emergency food and medical aid for those of all faiths.