The stories told by five top Syrian Christian leaders about the horrors their churches are experiencing at the hands of Islamist extremists are biblical in their brutality.

Bishop Elias Toumeh, representative of the Greek Orthodox Patriarch of Antioch and All the East, tells of the funeral he led ten days ago for the headless body of one of his parishioners in Marmarita. Rev. Adeeb Awad, vice moderator of the National Evangelical Synod of Syria and Lebanon, explains how the rebels blew up his church and then pointed the finger at the regime. Bishop Armash Nalbandian, primate of the Armenian Church of Damascus, says he received word on Facebook from a fellow bishop in Aleppo that two congregants were traveling when opposition fighters stopped their bus, made them present their Armenian IDs, and then took them away. The fighters, Nalbandian recounts, returned to the fellow passengers a few hours later with a box, which they said were cakes. Inside were the two Armenian heads. 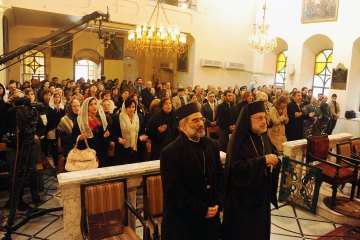 The bishops’ stories are difficult to independently verify, and the war’s death toll goes far beyond just Christian communities in Syria–more than 130,000 people have been killed since the fighting began, and at least two million others have fled the country. But they are emerging as part of a concerted push by Syrian Christians to get the U.S. to stop its support for rebel groups fighting Syrian president Bashar al Assad. “The US must change its politics and must choose the way of diplomacy and dialogue, not supporting rebels and calling them freedom fighters,” says Nalbandian.

The group is the first delegation of its kind to visit Washington since the crisis began three years ago, and its five members represent key different Christian communities in the country. Awad, Toumeh, and Nalbandian were joined by Rev. Riad Jarjour, Presbyterian pastor from Homs, and Bishop Dionysius Jean Kawak, Metropolitan of the Syrian Orthodox Church. The Westminster Institute and Barnabas Aid, two groups that focus on religious freedom and relief for threatened faith communities, sponsored their trip.

Given the United States’ increased support for non-terrorist rebel groups in the wake of the Assad regime’s use of chemical weapons, the religious leaders’ mission is a long shot. The bishops are asking the United States to exert pressure on countries like Saudi Arabia, Qatar, and Turkey to stop supporting and sending terrorist fighters to Syria. “The real problem is that the strong military opposition on the ground is a foreign opposition,” Awad explains, arguing that US support of opposition groups means support for foreign terrorist fighters. “They are the ones killing and attacking churches and clergy and nuns and burning houses and eating human livers and hearts and cutting heads,” Awad says.

The Syrian Christian churches are not publicly calling for outright support of the Assad regime. Doing so would further endanger their followers and hurt the moral component of their case, given the regime’s alleged use of chemical weapons against civilians. Instead, they’re meeting privately with law makers, diplomats and think tanks. Sunday evening, they spoke with Rep. Frank Wolf (R-VA) at St. John the Beloved Catholic church in nearby McLean. On Monday, they held court at the Heritage Foundation and Catholic University of America. On Tuesday, they met with Rep. Anna Eshoo (D-CA), Rep. Robert Aderholt (R-AL) and Rep. Louie Gohmert (R-TX), and then met with leaders of the U.S. Commission on International Religious Freedom. Wednesday’s lineup included Sen. Lindsay Graham (R-SC), Sen. John McCain (R-AZ), Sen. Joe Manchin (D-WV), State Department officials including Lawrence Silverman, Near East Affairs deputy acting aecretary, and Uzra Zeya, acting assistant secretary for the Bureau of Democracy, Human Rights, and Labor, and then a final stop at the U.S. Institute for Peace.

It’s been a difficult issue to gain traction on, if for no other reasons than that support for Christians and endangered minorities can appear as support for Assad and that an entire country is being destroyed by war, not just Christian communities. President Obama only briefly mentioned Syria in his State of the Union address on Tuesday. “In Syria, we’ll support the opposition that rejects the agenda of terrorist networks,” he said. “American diplomacy, backed by the threat of force, is why Syria’s chemical weapons are being eliminated, and we will continue to work with the international community to usher in the future the Syrian people deserve—a future free of dictatorship, terror and fear.”

Traction in Congress has also been a challenge, but a handful of leaders are speaking out. The U.S. House of Representatives passed legislation in September, authored by Wolf and Eshoo, to create a special religious minorities envoy at the State Department who would work for policy options to protect faith communities, but the bill has yet to move forward in the Senate. “Meeting with the delegation of Syrian Christian church leaders this week provided a constructive opportunity to raise awareness and to discuss concrete steps that can be taken to help protect Christians and other religious minorities in Syria,” says Eshoo. “Christians in the U.S. should be informed by their leaders about the atrocities taking place in Syria. The history of violence against religious minorities must not be allowed to repeat itself.”

Wolf has championed the cause during his congressional tenure, but he is retiring at the end of this term. Newer leaders like Aderholt see it as a time to take a stand. “Most Americans do not realize that Christians across the Middle East are in grave danger and have often been forced to leave their home countries due to persecution and threats from radicalized Muslims,” he says. “If we want a true democracy to emerge from this region, Christians and other religious minority voices must share in the decision-making process, and certainly not be persecuted and fear for their lives due to extremist elements that are pouring in to Syria.”

The bishops’ stories are similar to other grim instances of violence against Christians during the war. Christian schools in Damascus were shelled in November. The next month, a dozen Greek Orthodox nuns were taken from Mar Takla Monastery in Maaloula. Rebel groups abducted two bishops near Aleppo last April. Jesuit priest Paolo Dall’Oglio, whom TIME wrote about in 2012 when he visited the United States on a similar lobbying trip, has been missing and feared dead since July.