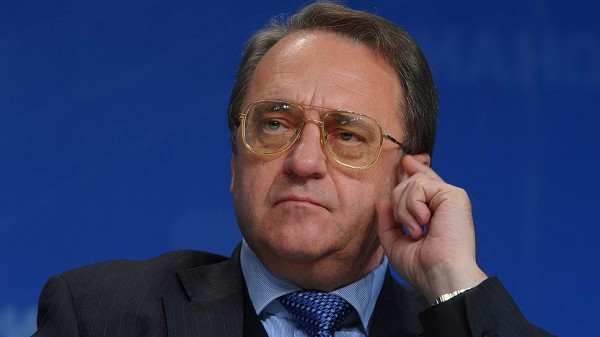 “As the Syrian conflict is picking up pace, more reasons are emerging to fear for the future of the Christians’ 2000-year long presence in the region,” Bogdanov told the Imperial Orthodox Palestine Society on Tuesday.

“This live, centuries-old tradition is under the threat of utter disappearance,” the Russian diplomat said.

Bogdanov also said that air strikes on the Islamists’ positions in Syria may have a disastrous effect on the Christian population of that country.

“The missile and bomb strikes being dealt by the United States’ allies on the Islamists’ positions, especially in Syria, occur bypassing the UN Security Council and without the consent of the legitimate government in Damascus, all of which may lead to hard consequences for the Christian population,” he said.

“The tragic situation the Christians have found themselves in the Middle East is causing the most serious and growing concern in Russia,” Bogdanov said.

The population of Christians may shrink dramatically in this region at best, as in Iraq in 2003, he said.

Most viewed articles
“Do Not Weep”145
Best Films of the Pokrov Film Festival Have Been Determined129
Christ the Life Giver126
(VIDEO)Celebrating 5 years of Byzanfest International Orthodox Film Festival78
Patriarch Kirill Answers Questions from Participants of the Ninth Faith and Word Festival72
The Religion of Self69
“He preached the message of the Resurrection for 12 years”: First Bishop of Deva Gurie Georgiu laid to rest at Cathedral of St Nicholas16
Using Our Time Wisely to Cultivate the Seeds of Faith2
Most popular authors
Pravmir.com team279
Archpriest Peter Olsen145
Fr. Theodore Stylianopoulos126
Fr. Gabriel Bilas69
Aurelian Iftimiu16
Priest Luke A. Veronis2