Source: The Christian Post
Samuel Smith | 12 August 2017
Seven Christians living under the rule of the torturous Islamic State terrorist group in Raqqa, Syria, have been rescued by Christian fighters affiliated with the Syrian Democratic Forces. 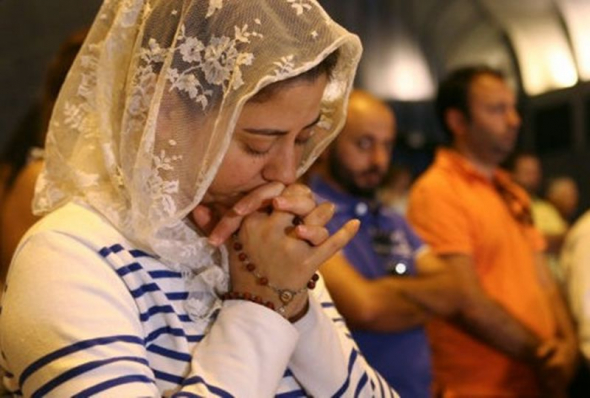 The rescued Christians, who were among hundreds of civilians trapped in the militant group’s de-facto capital of Raqqa, were saved on Tuesday by the SDF, which is a multi-ethnic and multi-religious military alliance that includes Kurdish, Arab and Assyrian militias and militias of other religious groups.

The Syriac Military Council, a Christian military organization formed in 2013 that is linked with the SDF, announced Tuesday that the seven people rescued were of Syrian and Armenian origins who were all originally from the city.

A Christian woman named Saws Karabidian who was rescued on Tuesday told the Kurdish news outlet ARA News what it was like to live under IS’ rule.

“They forced us to wear the headscarf and allowed us to reveal our faces to distinguish us from Muslims. We had to hide our faces to avoid insults,” she said.

Another Christian rescued by the SDF named Karadij Karadjian was quoted as telling SDF fighters that he was forced to pay a tax for being Christian. As IS rose to power in Iraq and Syria in 2014, it was widely reported that the terror group demanded that non-Muslims either convert to Islam or pay a jizya tax, or else they would be killed.

Hundreds of thousands of people in the region chose to flee their homes in order to avoid IS’ wrath. Others, however, were not as fortunate.

“We were forced to pay tribute by hand and we were humiliated and insulted,” Karadjian was quoted as saying. “Today is a new birth for us.”

Karabidian’s relative Alexey told AFP that they were forced to celebrate each religious holiday in secret, stating that when IS came into Raqqa, they burned the churches, prayer books and statues of the Virgin Mary and Jesus.

“We used to celebrate our holidays in secret, spending them at home in fear,” the Christian woman explained. “We would light a bit of incense just to feel that it was a religious holiday.”

According to ARA News, Over 200 fighters associated with MFS are fighting with the SDF against IS in Raqqa. Last November, the SDF launched a military campaign to retake the city from IS. The campaign is called “Operation Wrath of Euphrates.”

“Daesh are using civilians as human shields inside the city,” MFS fighter Alexi Chamoun said in an interview with ARA News. “Some civilians are fleeing and surrendering themselves to us, with them children and women. Daesh is known for it’s brutal actions and behavior.”

ARA News reported on Thursday that SDF forces liberated as many as 264 civilians from the Nazlat Shehadeh neighbourhood in southern Raqqa on Wednesday.

“Among the main tasks of the SDF troops is to maintain the safety of civilians. The SDF factions have therefore opened safe corridors and rescued hundreds of people who had been trapped in Raqqa,” An SDF statement reads. “In Nazlat Shehadeh, south of the city, a group of civilians tried to reach the points liberated by our forces. However, a landmine planted by ISIS terrorists in the neighborhood killed a number of civilians and injuring eight others, including two women.”

According to AFP, the campaign to retake Raqqa from IS has so far been successful in liberating about half of the city.