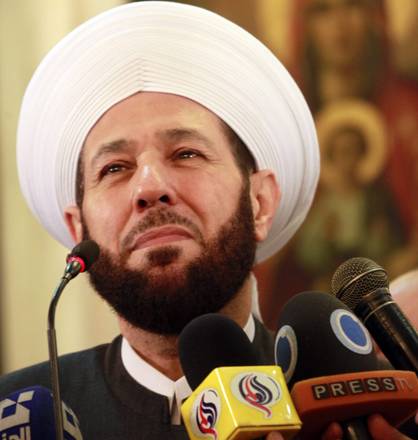 “I am greatly glad to express to you the most sincere gratitude and appreciation for your generous efforts aimed at supporting the oppressed peoples and fighting international organized terrorism targeted against our beloved country of Syria, against its civilization, people and infrastructure,” the mufti said in a letter to Patriarch Kirill, a copy of which was received by Interfax-Religion on Tuesday.

The direct and indirect support of the patriarch “played a huge role in building the spirit of resistance and protecting noble principles, love of the motherland, territorial integrity and deciding on their own fate,” Hassoun said.

“Syria is an ancient country with historical roots and firm long-standing relations with its friends, and particularly with the faithful Russian people, who believe in noble human values and the right of peoples to self-determination and simultaneously believe in the preservation of the commandments and laws of our Lord,” the letter reads.

The mufti is sure that if the terrorism which has reached Syria is not destroyed as quickly as possible, “it will expand and spread all around the world and will create a real threat to humankind, [leading to] its moral and physical destruction.”

He hopes for Russia’s further assistance in “the destruction of terrorism so that humankind will live in peace, which all of us are seeking for, keep going on the paths of prophets, Jesus Christ, a prophet of love and peace, and Muhammad, a prophet of mercy and fraternity.”