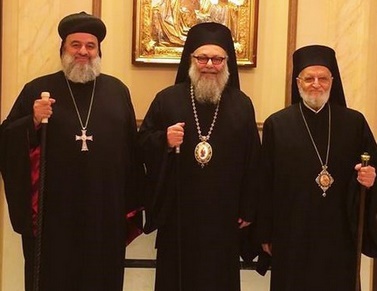 DAMASCUS: Three Christian patriarchs of Damascus made an appeal to the international community, the nations of the world and the big powers to “lift international sanctions” that hamper access to food and aid, “stop the siege of the Syrian people” and allow the country and its citizens to “live in dignity”, enjoying the basic rights of “all the peoples of the world.”

In five years, at least 290,000 people have died, and millions have been displaced, creating a humanitarian tragedy of enormous proportions. In their letter, the Christian leaders point out that “Since the beginning of the crisis in Syria in 2011, the impact of the economic and financial sanctions [have] increased on the daily lives of Syrian citizens.”

This has “deepened the suffering of the Syrian people” and represents “another aspect of the crisis,” resulting “in more pressure on individuals, institutions, companies, and consequently on the entire people.”

“The absence of new investments and the ban on international flights to Syria, as well as the reduction of exportation to the country and listing some Syrian companies on the blacklist of international trade, are considered to be economic measures towards the isolation of Syria from the international community.”

In addition, “the closing of most of the embassies of western countries in Syria and the withdrawal of their employees limits the diplomatic relations and the foreign interaction of Syria with other countries.”

Likewise, “the ban on international banking transactions with Syria puts the people in a financial difficulty. It impoverishes the citizens and threatens them in their daily bread and deprives them of their human dignity.”

As a result of this, “the prices of basic necessities become higher,” purchasing power drops, and “new social problems” emerge.

“Though the main goals of imposing these sanctions are political,” their impact affects “the life of the entire Syrian people, especially the poor and [the] working class”.

“Therefore, we, the three Patriarchs residing in Damascus where we closely feel the suffering of the people of Syria [. . .], raise our voices in this humanitarian appeal demanding the lifting of the economic sanctions” on the basis of the “Human Rights Charter and other International Covenants”.

The three patriarchs end their appeal by emphasising that sanctions only encourage the ambitions of those who ” do not want the common good of the country.”

Lifting sanctions will instead “facilitate the work of our ecclesial and humanitarian organizations in conferring humanitarian aid and delivering medicine and medical equipment”.

Meanwhile, Turkey continues its offensive in Syria against the Islamic State (IS) and Kurdish militias (People’s Protection Units, YPG). The IS-held town of Jarabulus, near the Turkish border, is the focus of the operation.

In Al-Hasakah, in northeastern Syria, the Syrian army and Kurdish fighters agreed to a truce after intense fighting for control of the area.

A statement distributed to journalists by a Kurdish official said the agreement included “a ceasefire and the withdrawal of all armed forces from the city.” The two sides would also exchange prisoners and wounded, and reopen roads blocked off during fighting.—Asia News