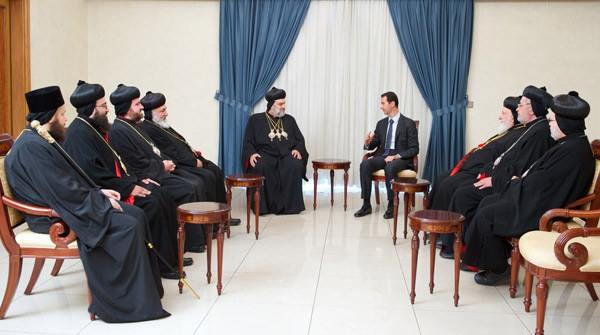 The new patriarch and his accompanying patriarchate delegation were given a warm welcome and cordial reception by the Syrian president.

Al-Assad congratulated the new patriarch, wishing him luck in his new post and affirming the patriarchate’s vital role in spreading the culture of love and fraternity amidst the jihadist threat affecting the region and the world.

Karim expressed his hope that security and peace would soon prevail in Syria, whose people he said were a shining example of national unity. He further asserted that the Syriac Orthodox Patriarchate supports the Syrian people’s struggle against terrorism and their right to self-determination away from the interference of any foreign side.

The patriarch also stressed that the followers of the Syriac Church are determined to remain steadfast in their homeland and defend it with all their capacities and expressed his happiness to return to Damascus, the capital of Syria and the Syriac Church.

“As for us, Damascus is the Antioch which was the capital of Syria at the Roman days,” he said.

Karim is the 123rd successor of St. Peter in the Apostolic Sea of Antioch. He will be enthroned in Damascus on 29 May.

In 1985, Karim took the vows of a monk and was elevated to the sacred priesthood. From 1988 to 1989, he served as both the secretary of Ignatius Zakka I Iwas, Syriac Orthodox Patriarch of Antioch and All the East, and as a teacher at St. Ephrem’s Theological Seminary in Damascus.

On 28 January, 1996 he was consecrated as Metropolitan and Patriarchal Vicar of the Archdiocese of the Syriac Orthodox Church of Antioch for the Eastern United States.

Over the past decade, Karim established himself as an ecumenist, very much concerned about Christian Unity. He has served on both the executive and central committees of the World Council of Churches, as a member of the Syriac Orthodox delegation. Moreover, he has been an active member of the executive and governing boards of the National Council of Churches of Christ in the United States.

Karimalso serves as vice-chairman of the Standing Conference of the Oriental Orthodox Churches in America. In recent years, His Eminence has been instrumental in the establishment of a new and promising ecumenical body in the United States called Christian Churches Together.

In his first statement as a patriarch, Karim said, “I have split feelings. I really love my churches and their members in America, but this is God’s will. And I believe that the Syriac-Orthodox Patriarch never should be moved from Damascus. It’s the right place, so I’m ready to move back to my native country to serve my church as its new shepherd.”