Tatarstan is responsible for ethnic relations to all Russia – Patriarch Kirill 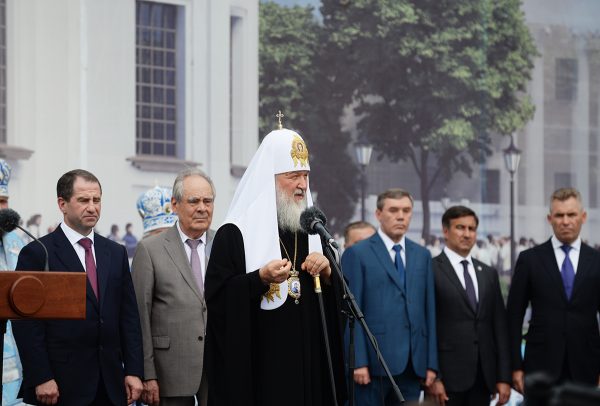 “I hope to God that religious and ethnic relations will continue developing well in Tatarstan and that the authorities of Tatarstan, realizing their special responsibility not only to the people of the republic, but also to the entire Russia, for these ethnic and religious relations, will continue the policies started by Mintimer Sharipovich (Shaymiyev – IF) and that you continue wonderfully,” the patriarch said during a meeting with Rustam Minnikhanov, the head of Tatarstan, in Kazan on Thursday.

The republic has virtually two equally large communities, Orthodox and Islamic, and “the way ethnic and religious relations are developing here depends the development of these relations in other places,” the patriarch said.

“There is no concentration of Muslims living in a large center, which is called the third capital of Russia, not in some remove villages, anywhere. There is also a very strong Orthodox community here, and therefore the impulses from this cooperation, interaction are perceived in the entire Russian Federation,” he said, thanking Minnikhanov for his care for the republic’s Orthodox Christians.

Minnikhanov, for his part, said the consolidation of representatives of different ethnicities and religions “guarantees dynamic development of the republic.”

The people of Tatarstan were looking forward to the patriarch’s visit and said he is confident that the patriarch will visit the republic again when the Kazan Cathedral, whose foundation he sanctified today, is built, he said.