Source: Trend News Agency
It should be noted that Catholicos-Patriarch of All Georgia, Ilia II announced May 17 the day of strong family and honoring parents.
Nana Kirtzkhalia | 17 May 2014
A march of same-sex marriage opponents has kicked off in Tbilisi, Georgia. 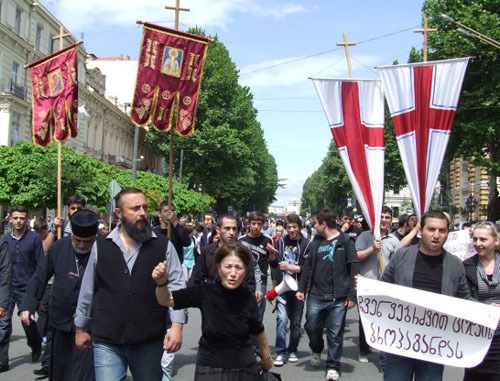 Several hundred people have gathered near the concert hall in Tbilisi, protesting against the extremist propaganda of feminism and same-sex marriages.

It should be noted that Catholicos-Patriarch of All Georgia, Ilia II announced May 17 the day of strong family and honoring parents.

Georgian orthodox church primate also blessed the priests to hold divine services at churches on May 17 at 12:00 (local time) and bless the houses, streets and families with the holy water.

The protest participants are heading towards the Holy Trinity Cathedral to attend the divine service there.