Source: Sputnik
During the military conflict in Ukraine 72 Orthodox churches were damaged, with ten of them completely destroyed.
Natalya Mihailova | 07 January 2015
DONETSK, January 6 (Sputnik) — More than 70 Orthodox churches have been damaged with ten of them completely destroyed during the conflict in southeastern Ukraine, Donetsk news agency reported Tuesday quoting the press secretary of the Donetsk Diocese of the Ukrainian Orthodox Church of the Moscow Patriarchate. 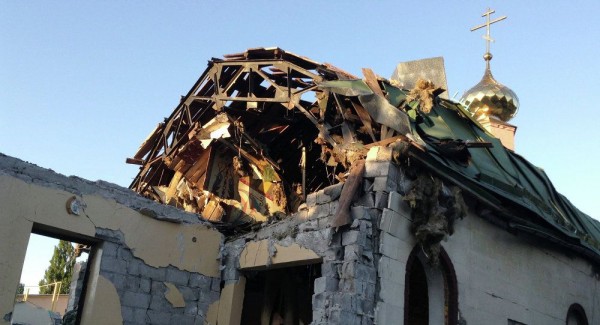 “During the military conflict in Ukraine 72 Orthodox churches have been damaged, with ten of them completely destroyed. For instance a wooden church in Horlivka burned down after being hit by a shell. Churches have also been destroyed in Kirovskoye village, Petrovsky district and other settlements,” Georgy Gulyaev said as quoted by Donetsk news agency.

According to Gulyaev, 62 churches have been damaged partially with windows broken and roofs, domes and walls damaged by shelling. “So far we don’t have plans to rebuild or repair the damaged churches in 2015. The Diocese has no budget for this year. Regarding this issue we are counting on the help of locals, philanthropists and the [local] authorities,” Gulyaev said.

In April 2014, Ukrainian authorities launched a military operation in the country’s southeast to suppress those who refused to recognize the government imposed after a February coup in Kiev. According to the latest UN estimates, the conflict between Kiev and the independence supporters of Donetsk and Luhansk has claimed more than 4,700 lives and over 10,000 people have been wounded. In September, under the mediation of Russia and the OSCE, the sides agreed on a ceasefire, but since then they have repeatedly accused each other of violating the agreement.