Tenth-Anniversary Celebrations at the Convent in Bavaria

Source: ROCOR
Natalya Mihailova | 24 October 2015
On October 10, 2015, the tenth anniversary of the founding of the Convent of Holy Grand Duchess Elizabeth in Buchendorf, Germany, was celebrated. 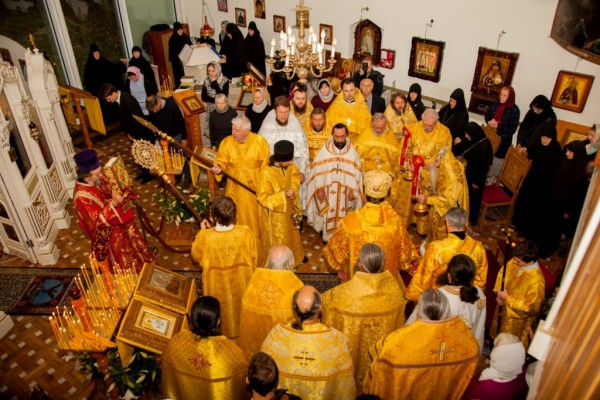 The nuns began preparations for the event well in advance, and pilgrims from all over Germany, Russia and the “near abroad” began to gather several days in advance to help the sisters. The convent turned into a virtual beehive of activity, in which everyone tended to their assigned tasks, bringing forth the sacrifice of love for St Elizabeth, and garnering the love and grace of the Holy Spirit.

Attending the ceremony were visitors from Russian, England, Serbia, Austria, the Holy Land and Switzerland. Among the honored guests were His Highness Margrave Maximilian and his wife, Grand Duchess Valerie of Baden; Frau Schreknert of the Administration of Gauting and Frau Nadezda Wishnewskaya, Gauting Gymnasium principal.
The small church could not accommodate all the worshipers, however, the audio of the service was through speakers outside. A special quiet piety was especially palpable.

Afterwards, the hierarchs, clergymen and multitude of guests were invited to a trapeza luncheon held at the new convent refectory. Vladyka Agapit consecrated the hall before the meal commenced. Tents were erected outside to accommodate the many pilgrims.

Abbess Maria then welcomed the guests, shared her memories of the establishment of the convent, the difficulties and also the divine aid that helped the nuns. Vladyka Mark then congratulated Mother Maria and her nuns, as well as all who took part in the life of the monastery, stressing the work of Andrei Hann, who led the effort to establish the convent. The benefactors, donors, builders and others who helped adorn the convent were given decrees of blessing and painted icons of St Elizabeth. The German-speaking guests were accommodated, too; concurrent interpretation of the services into their native tongue was provided through headphones.

A children’s choir comprised of participants in the convent’s annual summer camp then sang magnificently under the professional direction of Lyubov, a parishioner from Amberg.

The convent’s architect, Svetlana Kutt gave a presentation on the future plans of the convent, explained the architectural ensemble of the monastery, the main focus of which will be the construction of a white-stone church.

Later that evening, a concert was given at Archangel Michael Church, built in the 7 th century, just to the north of the convent. The wonderful acoustics enhanced the men’s choir under the direction of Munich Cathedral’s Vladimir Tsiolkovich. The highlight of the concert was a violin and guitar duet by Eugene Zhuk and Andrei Lebedev, which drew thunderous applause.