We Thank the Lord

Source: ROCOR
Natalya Mihailova | 27 November 2014
In 1941, the Congress of the United States passed a law designating the fourth Thursday of every November as Thanksgiving Day. The First Deanery of the Eastern American Diocese began preparations for this holiday early by holding a food drive, a project devised by the 13th All-Diaspora Russian Orthodox Youth Conference, as the Vice President of the Synodal Youth Department, Protopriest Andrei Sommer: 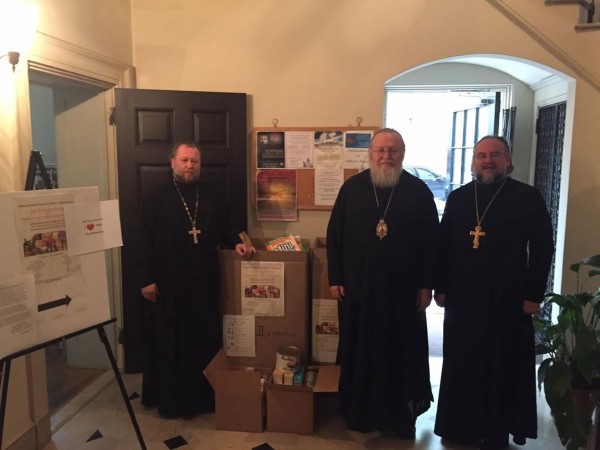 Manifesting one of the decisions of the Conference, held last summer in San Francisco, the Synodal Youth Committee ran a food drive in the weeks approaching Thanksgiving Day in coordination with a local food bank. The collected food is intended for the poor and homeless in the New York area. With the blessing of His Eminence Metropolitan Hilarion of Eastern America and New York and the help of the youth group of St Nicholas Patriarchal Parish, canned and preserved foods were gathered at various parishes of New York, joined by parishes of the Russian Orthodox Church Outside of Russia in the Los Angeles area. The Synodal Youth Department worked with parish rectors in the New York deanery.

The conference in San Francisco drew up the outlines of the project, which included a resolution addressed to diocesan administrations, deaneries and parishes to spark various forms of social service and charity.

“Canned goods were picked up by trucks provided by the food bank,” said Fr Andrei. “In total, counting the work of Orthodox youth and parishioners of the New York deanery, Transfiguration Cathedral parish in California, we collected 1,890 pounds of food which will feed over 1,600 people. On Thanksgiving, this food will be provided to food distributions centers and soup kitchens. This will benefit not only the general population of poor in the New York area but Russians who are among the homeless and needy.”

Thanksgiving was originally a holiday of thanks to God, and to one’s family and friends for material well-being and the opportunity to freely practice one’s faith. Traditionally this occurs at the end of the harvest season, when people thanked God for a good bounty. This holiday is celebrated in the US, Canada and Australia (though on different days), but has sadly lost much of the religious roots and became a civil holiday.

The holiday is rooted in America’s early days, when emigres from England arrived in 1620. After a difficult journey over a stormy ocean, they arrived in November frost in what is now Massachussetts.

More than half of the hundred or so pilgrims did not survive, suffering cold, hunger and disease. The survivors founded the Plymouth colony in the spring, and together with local Indians, who taught them agriculture and means of surviving in the rocky terrain, began to work the earth. The unexpected bounty of their first harvest rewarded their efforts. The first governor of the colony proposed organizing a day to bring thanks to the Lord. On this autumn holiday they invited 90 Indians from the tribe that helped them, and shared their first Thanksgiving feast with them.

“Over the years, Thanksgiving has gradually lost its historic significance,” said Fr Andrei. “Immigrants coming to America would express their heartfelt thanks to God, and while believers in Russia were persecuted, they found a place where they could freely practice their Orthodox Christian faith and bear witness to Christ. My grandparents celebrated this day like all Americans. Each of them had a concrete thing for which to bring thanks to God. Much has changed over the years, but our gratitude to the Lord remains the same.”

On Thanksgiving Day, after Divine Liturgy in the Orthodox church of the USA, a moleben of gratitude is served. This service is available in the new trebniks (service books). Unfortunately, parishioners themselves rarely request this service.”

“We must thank God not only in word but in deed,” said Fr Andrei. “This is indicated in the trebnik.”

“It would be a crime if, as we enjoy the fruits of Divine mercy, we forget about His grace, since remembering brings us great benefit. For He does not anything from us, for He is the Giver of all things,” as St John Chrysostom explained. Our thanks does not add to God’s glory in any way, but it draws us nearer to Him. If we remember the benevolence of others, we in turn are infected with greater love.”

“One of the sponsors of the 13th Russian Orthodox Youth Conference, the Fund for Assistance to the Russian Orthodox Church Outside of Russia, has designated this a day of thanks, generosity and mercy, to counter the commercialization of Thanksgiving.”

This year, the believers of New York have manifested one of the conference’s projects, in the hope that next Thanksgiving, this charitable effort will expand to other dioceses of the Russian Church Abroad. And not only in America.

Most viewed articles
Growing Cold in Faith after a Few Years in Church: Is This Normal?173
It’s All About the Resurrection – Reflecting on the Season84
Bishop Irenei Addresses a Symposium on “The Mother of God in Our Lives” in Los Angeles84
How to Survive in Modern City. 8 Essential Conditions81
Russian Church to Help Provide Lebanon with Vaccines Against Coronavirus77
Over 20 Thousand People Pray for Discrimination of the Ukrainian Orthodox Church57
Volunteers from St George Greek Orthodox Church in Rose Bay gather to cook for the homeless46
Appeal for Help from the Church of the Mother of God in Austria36
Vandals Attack Serbian Church in Croatia30
We’re Being Robbed1
Most popular authors
Pravmir.com team248
Archpriest Nikolai Markovsky173
Archpriest Gabriel Rochelle84
Fr. Andrei Gavrilenko81
John Voutos46
Archpriest Georgy Kharlov36