Thanksgiving said in Rome, at the relics of St Cyril, Equal-To-The-Apostles, on the name day of the Primate of Russian Church

Source: DECR
Natalya Mihailova | 25 May 2015
On 24 May 2015, Name Day of His Holiness Patriarch Kirill of Moscow and All Russia, a thanksgiving was said at the holy relics of St Cyril, Equal-to-the-Apostles, Teacher of the Slavs, in the Basilica of St Clement in Rome. 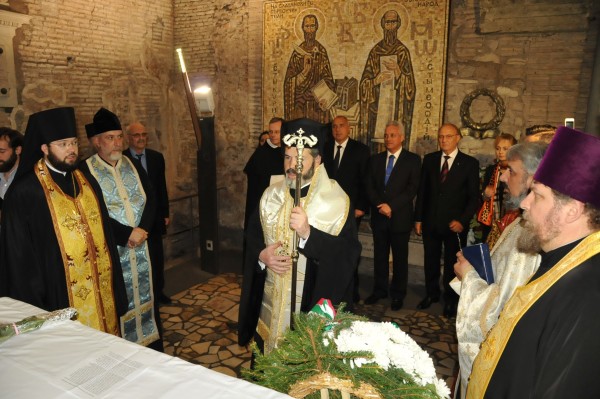 To continue the established tradition, the flock of the Patriarchal parishes in Rome, numerous pilgrims, and representatives of the Bulgarian, Serbian and Romanian Orthodox communities in the Italian capital gathered under the vaults of one of the oldest Christian churches in the Eternal City. 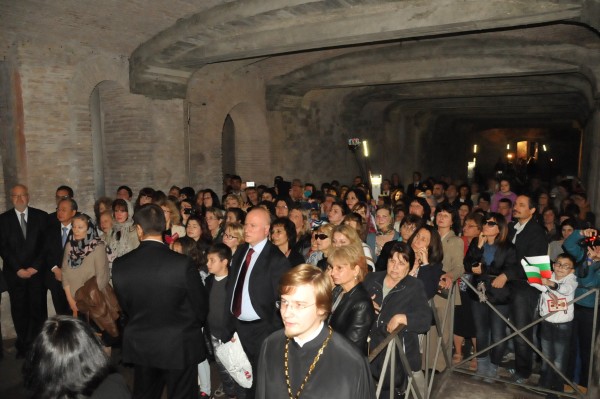 Metropolitan Antonii of Central and Western Europe (Bulgarian Orthodox Church) officiated at the prayer service at the tomb of the holy enlightener of the Slavs. Concelebrating with him were Archimandrite Antony (Sevryuk), Secretary of the Administration of the Moscow Patriarchate’s Parishes in Italy; Archpriest Vyacheslav Bachin, rector of the Church of St Nicholas in Rome; and clerics of the Bulgarian Orthodox Church’s diocese in Western Europe.

Among those who were praying at the service were Mr. Boyko Borisov, Bulgaria’s Prime Minister; ambassadors of Bulgaria, Serbia, Romania and other countries, accredited to the Holy See; and over three hundred pupils studying at the Bulgarian educational institutions all over the world.