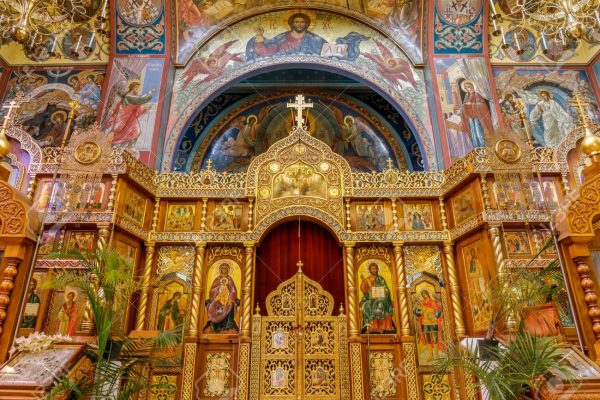 The years 2020-2021 mark the 70th anniversary of the arrival of the three Military Sea Transport Ships that brought Russian refugees from the island of Tubabao in the Philippines to the United States. The three ships that arrived in San Francisco arrived on November 30, 1950, January 25, 1951, and June 14, 1951. Previous ships carried Russian refugees that made the tent camp their home from 1949 to other countries, including Australia, South America and Europe. Some refugees arrived either by ship or plane from Shanghai, Harbin and other cities of China directly to the U.S.

With the blessing of His Eminence Archbishop Kyrill, a thanksgiving moleben was held on Sunday, January 24, 2021, at Holy Virgin Cathedral by the relics of St John of Shanghai and San Francisco after Divine Liturgy.

After World War II and the defeat of Japan, a full-scale civil war erupted between the Chinese communists led by revolutionary Mao Tse-Tung and the ruling republican party led by militarist, Chang Kai Tsek.

As it became ominously clear that Mao would soon undoubtedly take Shanghai, the white Russians, “stateless” since they no longer had valid “Imperial Russian” passports, and with no nation to shield them from harm, as anti-communists, they would surely be persecuted by the Chinese communists.

Gregory K. Bologoff, a former Cossack colonel in the Tsar’s Imperial Army, managed to unify several ethnic groups of refugees within the Russian Emigre Association in Shanghai and planned their mass departure. Bologoff’s powerful leadership resulted in most of the white refugees to affirm their opposition to communism by refusing to accept Soviet citizenship and return to Russia, where they had already heard from relatives and friends who did return that life was not as it was before and it was dangerous for them if they returned. Bologoff sent letters appealing to the world’s free countries to grant asylum to the refugees, indicating the imminent danger and great tragedy that was in their future if no help arrived. Despite receiving letters of comfort and sympathy, no country offered to take any of them.

Then President of the Philippines, Elpidio Quirino, expressed a willingness to house the refugees. Through the International Refugee Organization (IRO), as transient guests, the Philippines offered the nearly 6,000 white Russians (this included all the ethnic groups that were part of this evacuation) refuge in Tubabao, until arrangements could be made for their immigration to other countries. And thus, from 1949-1951, a camp was set up by the refugees, with tents for family’s living quarters. Several churches, converted from left-over US army buildings from WWII, in various denominations held services.

Numerous groups, founded in Shanghai, League of Russian American Women, All Cossacks Union, Cadets, Monarchists continued their active work. Russian Scouts in great numbers, not only held their traditional campfires, processions, they were instrumental in helping clear the brush in the over-grown jungle of Tubabao and build the camp. IRO set up a school for all the children and youth on the island.

St John of Shanghai’s orphans from the St Tikhon’s Orphanage had also come to the island. A band was organized and entertained residents of the island with weekly dances. An orchestra, theater group, ballet and folk dancers all played their part in entertaining the white Russians.

It was with great anticipation and joy that the refugees welcomed St John of Shanghai to the island. His prayers and blessings sustained the refugees with hope, and while some refugees were able to leave the island in the beginning of 1950 to Australia, those that remained for nearly another year, remained optimistic that their prayers would be answered. It was Vladyka John who intervened on their behalf and appealed to the United States government to permit the remaining refugees to the U.S. His holy prayers were answered when then-California Senator William Knowland visited the Tubabao encampment in 1950 and upon returning to the US, introduced a bill to change the Displaced Persons Act to allow the remainder of the refugees into the U.S.

With the passing of the bill, on November 30, 1950, on the Military Sea Transportation Service (MSTS) ship, USS General ML Hersey, 620 white Russian refugees arrived in San Francisco. The second ship, USS General WG Haan arrived in SF on January 25, 1951 with another 1,117 people and the final ship of 490 arrived on June 14, 1951 (another 620 refugees came earlier on their own before the MSTS ships).

The remaining nearly 30 TB patients on Tubabao left the island in 1953 for France. Thus ended the epoch of the Tubabao refugee camp.

Special thanks to St John of Shanghai and San Francisco for his holy prayers to accept the refugees to the U.S., to Colonel Ataman Gregory K. Bologoff for his tireless efforts in organizing the evacuation of the nearly 6,000 emigres from China to safety and temporary asylum in Tubabao; to then-President Elpidio Quirino and the people of the Philippines for their hospitality, to Senator Knowland for his efforts in changing the bill to allow entry to the U.S., to all the residents of Tubabao camp that made the camp a home, to the Russian-American community, already living in the U.S. and to the Russian Orthodox clergy in helping the refugees in their introduction into a new life, finding jobs, finding accommodations, finding friendships in a new country, and to the United States for allowing them to call this country their home.