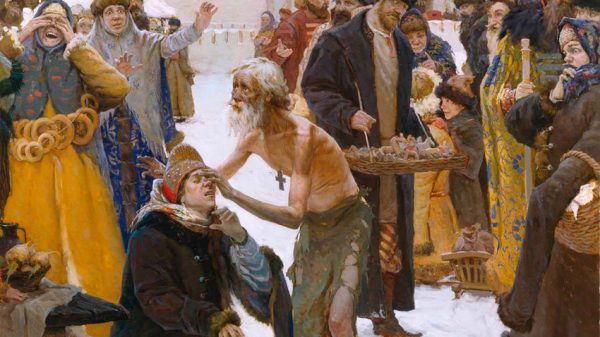 The average Christian, reading his Bible in happy devotion, stumbles across this passage:

Now I rejoice in my sufferings for your sake, and in my flesh I am filling up what is lacking in Christ’s afflictions for the sake of his body, that is, the church… (Col 1:24)

The passage is particularly disturbing for a certain strain of Protestant thought that emphasizes Christ’s sufficiency for all things. Christ has accomplished all things necessary to our salvation and we are thus able to “rest” in His completed work. For many, this is at the heart of grace. God has done for us what we cannot do for ourselves. What remains is for us to trust that this is so. Christ declares, “It is finished.” There is nothing left for us but trust.

This sentiment recently came crashing into a discussion of the Russian novel, Laurus. I attended (and spoke) at the Eighth Day Symposium in Wichita, Kansas. The presenter, Jessica Hooten Wilson, had spoken on the Russian novel, Laurus, in which the lead character enters the long, arduous life of a holy fool following the death of a woman and her child, a result of his own inaction. Wilson made mention of a review by Alan Jacobs (Baylor University) that described its spirituality as “Hindu,” and castigated its approach to Christianity. He wrote:

…though I know that Eugene Vodolazkin is a Christian, I remain uncertain about just what vision of the Christian life is being held out to me in this book…. In Laurus…long, hard spiritual labor pays for sins, as it does for the world…1

Vodolazkin nowhere characterizes Laurus’ labors as a payment for sin. Indeed, the concept is foreign to Orthodox thought. It is an absence that is so profound that a Protestant professor of literature felt the need to supply it, and with it, distort a beautifully Orthodox novel. In the discussion at the conference, a Protestant participant agreed that the novel seemed strangely unable to “rest” in Christ. Inasmuch as I am often not in dialog with Protestant Christians, I was caught off-guard by these observations. I forgot how foreign all of this is. Happily, it is also foreign to the New Testament.

Whatever one might think of grace, the work of Christ on the Cross in no way removes the work of the Cross from the lives of believers. We are baptized into the death of Christ, and continue to say throughout our lives: “I am crucified with Christ, nevertheless, I live” (Gal. 2:20). It is Christ who taught that we ourselves must take up the Cross and follow Him. There is no “resting” Christianity made available by a substitutionary work of Christ. The work of Christ is a matter of participation (koinonia) – we are baptized into it, live through its presence in us, and do not cease to share in that work, ever.

It is always difficult to listen to what is actually being said and not try to hear a conversation that is not taking place. Salvation, in Latin Christianity, was made captive, rather early on, to the language of “grace” and “works.” Within what would become a dominantly juridical framework, grace and works were easily externalized, raising questions about who was doing the “saving.”

When St. Paul says that he is filling up “that which is lacking” in Christ’s afflictions, he is either subscribing to some form of Pelagianism, or he simply has no notion of a juridical salvation. No doubt, the latter is the actual case. When he says that he is crucified with Christ, St. Paul means precisely what he is saying. Indeed, it is the deepest cry of his heart:

For his sake I have suffered the loss of all things and count them as rubbish, in order that I may gain Christ and be found in him, not having a righteousness of my own that comes from the law, but that which comes through faith in Christ, the righteousness from God that depends on faith— that I may know him –  the power of his resurrection, and the communion of His sufferings, becoming like Him in his death, that by any means possible I may attain the resurrection from the dead. (Phil. 3:8-11)

We know a little bit about this experience, for it is common in relationships marked by intense love. The coldness of a conversation regarding who did what, or what is owed to whom, has no place in such intimacy. Love speaks in terms of union. It wants to share in the deepest manner possible the life of the beloved.

There appeared a rift in Protestantism within its first two to three centuries. That rift, to a large extent, represented a deep dissatisfaction with a cold, sterile presentation of the life of grace. Early Protestants almost universally held to a doctrine of “cessationism,” teaching that miracles ended when the New Testament was completed. What remained were the rather mechanical/intellectual doctrines that assured of salvation. Dry as dust.

The reaction to this was the birth of Pietism, in a variety of forms and places. At its worst, Pietism’s emotionalism led to extremes of belief and practice. At its best, it produced holy lives and gave heart to what would have been little more than a dry death to Western Christianity. Inasmuch as Western Christianity survives our present difficulties, it will be the heart born in Pietism that saves it (or so I think).

The transformation of the Pietist conversion experience into the doctrine of being “born-again” has tended to confuse Pietism and classical Protestantism, framing the experience of the heart in the rigid language of doctrinal necessity. Like many aspects of Protestantism(s), fragmentation in doctrine and experience has been a continuing and dominant feature.

Classical Christianity, in its Orthodox form, is very rich in its vocabulary and stories of the human experience of God. It is always “ontological” in its approach to doctrine, meaning that doctrine is always about “something-that-is” and not about a theory, or a juridical arrangement. Because “something-that-is” is capable of being experienced, it is always seen as quite natural that the work of God has a describable, experiential component. If I am being crucified with Christ, it is inherently the case that such a thing is experienced in some manner. In the case of a holy fool, it might look a lot like the Laurus character. He must be contrasted with the middle-class American who sings happy songs on Sunday, perhaps even moved to tears, satisfied and assured that Jesus has taken care of everything such that he can safely return to the banalities of his life. Isn’t Jesus wonderful!

The simple truth is that the Kingdom of God “suffers violence, and the violent bear it away.” (Matt. 11:12) The gospel engages the whole person and assumes that we will love God “with all our heart, all our soul, and all our mind.” That such an engagement might be described by some as “works righteousness” is merely indicative of a bifurcated Christianity that has placed God in a second-storey doctrinal reality, while the secular party rages here below.

Thank God for the Lauruses sprinkled across the historical landscape. The unity of faith and experience exemplified in their sometimes stormy lives whispers hope that God dwells among us and loves us, willing Himself into the messiness of our crucified existence, ever-straining Himself into the depths of our being, while we strain to respond in kind, enduring “that which is lacking in the afflictions of Christ” – our own response to His love.