We Orthodox Christian hear this question quite often. In fact, it strikes a much deeper issue, namely, the issue with the Holy Tradition, which incorporates the works by the Holy Fathers. Here is a 101 on the Holy Tradition and why, according to the Church, you can’t understand the Bible without it.

Is the Bible Enough?

The correlation between the Holy Scripture and the Holy Tradition has been hotly contested between the Orthodox and the Protestants for centuries. It was as early as the 16th century that Protestants proclaimed their famous doctrine of Sola Scriptura (Latin for “only the Scripture”), claiming that the text of the Bible is enough for proper Christian living.


They declared that the Bible contains just enough information for our salvation and that the Tradition was a later and useless invention, which Christians had to get rid of as quickly as possible.

The Church teaches that the Holy Tradition is the earliest way of transmission of the Divine Revelation.

The Holy Tradition existed before the Holy Scripture and served as its basis. It isn’t hard to grasp it: even during our everyday lives we experience something first and then express our experiences in written form, if necessary. Aside from that, even the Bible admits that the Holy Tradition comes first.

Thus, we learn from the book of Genesis that God talked with Adam, Abraham, Isaac, Jacob, and Moses directly. We see that Abel already knows how to make a sacrifice of the firstlings of his flock and of the fat thereof to God (Gen. 4:4). Noah knows which animals are “clean” and which are “unclean” (Gen. 7:8). Abraham knows the tradition of tithing when he gives tithes to Melchizedek, king of Salem (Gen. 14:20). It is worth pointing out that none of them read the Scripture because there weren’t any written Scriptures at those times.

Old Testament characters lived without the sacred texts of the Scripture for many centuries. Likewise, early Christians did without the written New Testament because they tuned their spiritual and everyday lives in accordance with the oral Tradition of the Church.

Therefore, the Scripture is essentially the recorded part of the Tradition, which is why the former cannot exist without the latter.

Furthermore, the very fact that the Divine Revelation had to be put to paper, according to Saint John Chrysostom, indicated a steady decline of morals and spiritual deafness, which was spreading among people:

“In fact, we shouldn’t need the Scriptures; instead, we should lead a life so pure that we could use the grace of the Holy Spirit instead of books; and to the extent that books are written with ink, our hearts should be written on by the Spirit. Given that we have rejected that grace, let’s at least use the second way [i.e., the written Scripture—Translator’s Note]. 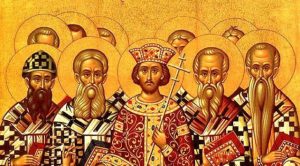 “Blank Spots” in the Holy Scripture


Interestingly enough, if we “remove” the Holy Tradition from the Divine Revelation, there will appear “blank spots” in the biblical text immediately—and it’s impossible to fill in those gaps without additional sources.

For example, Jacob tells his son Joseph in Genesis: “Moreover I have given to thee one portion above thy brethren, which I took out of the hand of the Amorite with my sword and with my bow.” (Gen. 48:22). However, nowhere in the Scripture (in the book of Genesis) do we find any mention of military actions that Jacob undertook against the Amorite with his “sword” and his “bow”.

Apostle Paul matter-of-factly writes to Timothy, “Now as Jannes and Jambres withstood Moses, so do these also resist the truth: men of corrupt minds, reprobate concerning the faith.” (2 Tim. 3:8) Again, here is the question: Where did Paul read about it if there isn’t any mention of a Jannes and a Jambres and their conflict with Moses in the Bible?

Moreover, there is a more fundamental problem, too. Readers of the New Testament must have faced it when they read the entire biblical corpus but could not find a detailed doctrine regarding certain basic tenets of Christianity, such as Sacraments. The question is: Why is the Bible silent about all those matters? This question can’t be resolved within the Sola Scriptura mindset.

Besides, the structure of the New Testament without the Holy Tradition appears vague due to discrepancies and incomprehensible passages. For example, what does Jesus Christ has in mind when He refers to the Heavenly Bread, to the grapevine, and to the water that flows into the eternal life? What does Apostle Paul urge us to do when he says, “[L]et a man examine himself, and so let him eat of that bread, and drink of that cup. For he that eateth and drinketh unworthily, eateth and drinketh damnation to himself, not discerning the Lord’s body” (1 Cor. 11:28-29)? What do the grapevine, the water, the bread, and the cup refer to? The New Testament text doesn’t provide us with a clear explanation.

However, all those questions disappear as soon as we put the Scripture into its original context, i.e., the Tradition.

Archpriest John Meyendorff stresses that the aforementioned words of Jesus “cannot be fully appreciated without knowing that Christians of the 1st century performed baptisms and celebrated the Eucharist.” Sayings about the cup, the grapevine, and the bread become clear as soon as we put them in the context of the Tradition. Again, it shows that the Scripture and the Tradition are reciprocally connected and inseparable. Their unity is the prerequisite for the conceptual completeness of the Divine Revelation.

The Holy Tradition is the prerequisite for true understanding of the Scripture, the point of reference based on centuries-long reading and analysis of the Bible, which allows every Christian to read God’s Revelation without the risk of distorting its meaning.

Remember the story from the book of Acts where Apostle Philip asked the Eunuch who was reading the Old Testament, “Understandest thou what thou readest?” The eunuch replied, “How can I, except some man should guide me?” (cf. Acts 8:30-31)? It is the Holy Tradition that “guides” a believer. It instructs us not only how to read the Scripture but also how to get saved. 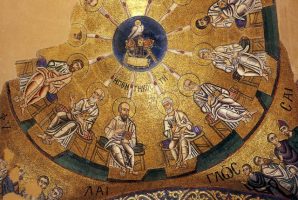 There’s Neither Tradition Nor Scripture Without The Church

Hieromartyr Hilarion (Troitsky) emphasizes that the Holy Scripture is part of the general grace-filled life of the Church. There is no Scripture, in the real sense of this word, without the Church.

Alexei Khomyakov pointed out that people who stay away from the Church are unable to comprehend the Scripture, the Tradition, and the practice of the Church.

At first, these statements might appear too straightforward and alienating. Yet, if we put them in the right context, all misunderstandings will be resolved.

The fullness of the Divine Revelation was given to the Church only once, on the Day of Pentecost. The Christians of the subsequent centuries merely unveiled and gradually explained this diverse Tradition.

Decrees of the Ecumenical Councils, doctrines of the Church, works by Holy Fathers, iconographic canon, church architecture, and the biblical canon—all of those are parts of the Holy Tradition.

Therefore, Church doctrine doesn’t evolve or develop in any way. It is expressed in the history of the human race and in the lives of holy people.

The authority in the Church is the Holy Spirit who dwells in it.