Source: DECR
Natalya Mihailova | 19 October 2015
On 16 October 2015, the 5th Pan-Orthodox Pre-Council Conference concluded its sessions, held at the Orthodox Centre of the Patriarchate of Constantinople in Chambésy, Switzerland. 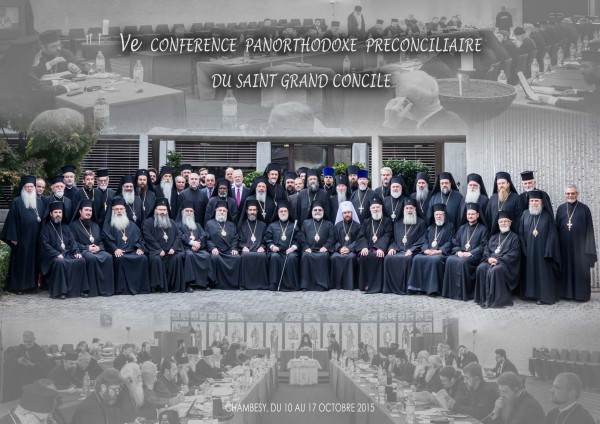 With the blessing of His Holiness Patriarch Kirill of Moscow and All Russia, a delegation of the Russian Orthodox Church, led by Metropolitan Hilarion of Volokolamsk, chairman of the Department for External Church Relations, took part in the meetings. The delegation also included Archbishop Mark of Berlin, Germany and Great Britain (Russian Orthodox Church Outside of Russia); archpriest Nikolai Balashov, DECR vice-chairman; Archimandrite Irinei (Steenberg), cleric of the ROCOR’s diocese of Western America; and Rev. Anatoly Churyakov, DECR interpreter.

His Holiness Patriarch Kirill of Moscow and All Russia sent his greetings to the participants in the conference.

The 5th Pan-Orthodox Pre-Council Conference approved a draft document of the Holy and Great Council of the Orthodox Church on Autonomy and the Ways of Declaring It, worked out by the Inter-Orthodox Preparatory Commission in 2009. The participants in the conference also considered the documents of the Pan-Orthodox Council, which had been edited by the Ad-Hoc Inter-Orthodox Commission at its sessions, held in Chambésy in October 2014, February and March-April 2015. Having taken into consideration the amendments proposed by the delegations of the Local Orthodox Churches, the Pan-Orthodox Conference approved the following documents: “The Orthodox Church’s Relations with the Rest of the Christian World” and “Importance of Fasting and Its Observance Today.”

Taking part in the conference were delegations of the Patriarchates of Constantinople, Alexandria, Antioch, Jerusalem, Moscow, Georgia, Serbia, Romania, Bulgaria; the Churches of Cyprus, Greece, Albania, Poland and the Czech Lands and Slovakia.