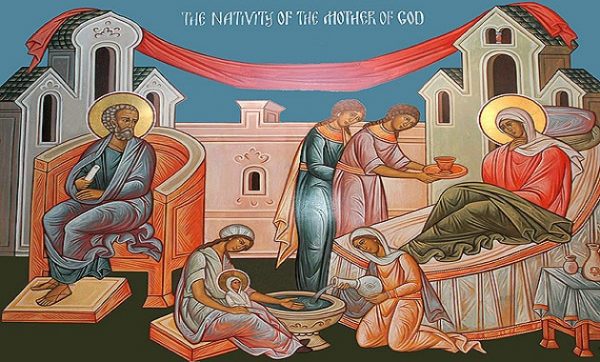 My beloved brethren and Fathers, today is a reason for spiritual joy and exaltation, because today we celebrate the birth of the ever-Virgin Mary, the Mother of God and the most fragrant blossom that ever burgeoned “from the root of Jesse”. We are celebrating the “birth of universal rejoicing”, which is “the doorway to all feasts and the prelude to the mystery of Christ”, according to Saint Andrew of Crete. The birth, which became the agent of the rebirth, remoulding, adornment and renewal of all things. Today, she is born who will bear, in time, in an unintelligible and extraordinary way, God the Word, the Creator and Saviour of the world, Who is outside time and pre-eternal.

All the prefigurements, prototypes and prophecies of the Old Testament refer to her. She is the culmination, the completion of the preparation of humanity in the Old Testament for the reception of God, the incarnate Saviour. The Mother of God is prefigured by the bush, in the unburnt bush* in Moses’ vision, the tablets written by God and the ark of the Law, the heavenly manna and the golden vessel, lamp and table, the rod of Aaron which budded, Jacob’s ladder, Gideon’s fleece, Daniel’s unhewn mountain, the furnace which cooled the Three Children with fire, and the Holy of Holies itself, in the tabernacle of witness. The Mother of God is the watershed between the Old and New Testaments. For the Old she was the preaching of the Prophets, the expectation of the just; while for the New Testament she is the sweetness of the angels, the glory of the apostles, the courage of the martyrs, the delight of the saints, the boast of the human race, which is why she is magnified by “all generations”.

All of creation awaited her birth. Our Most Holy Lady is “the fruit of created things”, according to Saint Nikolaos Kavasilas, that is the point towards which the whole of creation had been tending. As the tree exists for the fruit, so creation exists for the Virgin and the Virgin for Christ. As the Fathers emphasize, it was not only the human race; the heavens and the earth, too, the whole of visible and invisible creation, were created for the all-pure Virgin. When, at the beginning of the ages, God gazed upon His creation and said that it was “very good”, He was, in essence, looking forward to the fruit of all creation, Our Most Holy Lady, the Mother of God, and His praise, in fact, was  “commendation of the Virgin”.

On today’s occasion, the whole of creation is blessed by the birth of our undefiled Lady. This “newest creation” was not the best woman on earth, nor even simply the best woman ever, but the only one who was capable of bringing the heavens down to earth, of making God a human person. God the Word, the Creator, made human nature such that, when He needed to be born, He would take on this nature from His mother. God, invisible and unseen for her, now, through her, came to earth and became visible. He was united to and communicated with creation in a more substantial and more conscious way. Through His human nature, He unites the whole of creation in His hypostasis and deifies it. God, Who is without form, beyond description and without a dwelling-place assumes “the form of a servant” (Philip. 2, 7), human flesh, a logical soul; He had dealings with people and walked the earth. He Who was “beyond containment in all things” would be contained in the virgin womb, so that His Most Holy Mother would become the “enclosure of the Unenclosable”.

Today, the barrenness of Ann is undone and she gives birth to “the heirloom for the whole world”, according to the expression of Saint Cyril of Alexandria. God performed a similar miracle several times in the Old Testament, for Sarah, the Patriarch Abraham’s wife, Rebecca, the wife of Isaac, Ann the mother of the Prophet Samuel and Elizabeth, the mother of John the Forerunner. But today’s miracle is very different. It may be that the children of the above mothers, whose long-term sterility was resolved miraculously, were indeed virtuous and holy, but only Mary- the child of Joachim and Ann- was “full of grace” and became- in a manner incomprehensible to both people and angels- the Mother of God.

Our Lady was not born from an immaculate conception, as the Roman Catholics mistakenly believe, but after natural conjugal relations between Joachim and Ann.  Ann’s natural sterility was redressed thanks to the direct intervention of God, in answer to the prayers of the righteous forebears. The elderly Joachim and Ann came together without any carnal attraction or pleasure, but only in obedience to God. In this acts of theirs, they set the seal on their restraint. In this way, the Virgin was conceived “in temperance in the belly of Ann, through Joachim”. The fact she was conceived with restraint means that the manner of her conception was pure. But for the Virgin to have been born free of ancestral sin, i.e. to have had an immaculate conception, she would have had to been born of a virgin, as Christ was.

But to acquire such a child, the righteous Forebears showed unflinching faith and unremitting patience. They nourished the hope which does not bring shame, they had great persistence in their prayers and felt sure that God would fulfil their request. And it was not as though they bore their lack of a child for any short time. Tradition tells us that Ann conceived the Mother of God after fifty years of sterility.

Beloved brethren and fathers, this attitude on the part of the Forebears should be an example to all of us. Not only to those lay brothers and sisters who cannot have children, but should not lose hope in God, for “what is impossible for people is possible for Him (cf. Luke, 18, 27), but also to us monks and all the faithful who are “fighting the good fight”.

We often despair or become displeased in our struggle and say we have not had a response, we have no sense of Grace, and are distressed. So, saddened as we are, our zeal withers, and we relax our combativeness, our ascetic effort. But we shouldn’t be like that, my brothers. When God didn’t respond immediately to their prayers, did the Forebears stop entreating him,  cease to believe that they would receive, stop knocking, asking and hoping? And what adamantine patience and fortitude they showed for so many years!

In order to experience the spiritual “benefits of great patience”. Saint Isaac the Syrian lived through the withdrawal, the deprivation, of divine Grace, the sorrows of invisible warfare, for thirty years. He received divine Grace permanently after that long period of time of bloody struggle and patience. We mention this specifically for us monks, who have been called upon to receive the fullness of Grace. What’s needed is patience in sorrows, faith in the promises of God, perfect obedience to God’s will and hope “not to lose heart in our prayers” (see Luke 18, 1). God knows when it’s in our interest to give us  His inexpressible, inconceivable and invaluable glorifying gifts, His divine Grace as a resident condition. “Spiritual things come by themselves”, Abba Isaiah emphasizes, we don’t arrange them as and when we want.

Often, indeed, before God grants us some blessing, a gift, He tests us with a temptation, the result of which determines whether we prove to be worthy to receive the divine gift. We see this in the holy Forebears, too, who, when the time came for God to give them a child, He arranged to test them even further. It was the feast of the Tabernacles and when they went to the temple to offer their gifts, the high priest, Issachar, upbraided them, saying that they were not worthy to offer gifts to God because they had not given any children to Israel. After this, the Forebears were very sad, but did not give up hope. They had recourse to “prayer from the depths”- Joachim up in the mountains and Ann in the garden- which, in the end, was heard directly, since an angel of the Lord informed each of them separately that conception would place and that a child would be born who would be acclaimed throughout the world.

So we, too, beloved brethren and fathers, should show uncomplaining patience in the sorrows and temptations God grants us for our benefit and spiritual progress. We pray that Our Lady the Mother of God and the Foremother of God, who have the blessing of curing physical sterility, will cure our hearts which are barren of spiritual works, so that God will send to our souls His divine and most sweet Grace, which adorns, renews, and immortalizes people, making them incorrupt.

* A homily of Elder Efraim, which was given in the Refectory of the Monastery of Vatopaidi on the feast of the Birth of the Mother of God, 2002.

* It is important in the Orthodox view of Mary, that the bush was not “burning”; it was in flames but not consumed (Ex. 3, 2) [trans. note].

When Christians talk about death, they don’t do so with pessimism, they aren’t resigned to it, they don’t…