There is no need to blame or judge the situations we find in life. When we are met with tragedy in the lives of others, we do not need to try and figure out the why’s and wherefore’s. Whatever we decide will be nothing more than a self-serving fantasy. This is beside the point as Jesus demonstrates. What does matter is that we meet everything and everyone that comes to us with the same love and compassion we see in our Lord’s healing of the blind man.
Archpriest Antony Hughes | 23 May 2009 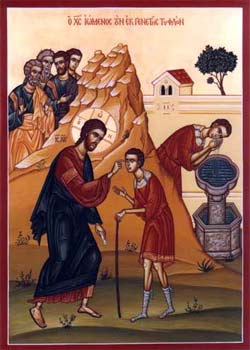 Jesus brings light into centuries of darkness in today’s Gospel reading. He does so much more than simply giving sight to the blind man; he opens the eyes of his disciples to an important truth about God.

The disciples ask him a question. “Who sinned, this man or his parents that he was born blind?” It is a question born out of misunderstanding and superstition, out of the attempt of humanity throughout the ages to make sense of tragedy, the bottom line being the belief that someone somewhere must be to blame.

In the minds of ancient peoples the whole world and everything in it was micromanaged by gods. Every thunderstorm was an event directly attributable to a deity: rain, sunshine, harvest, health, wealth, happiness, illness, everything was the province of a god. Some deity had to be in charge and to make sure that good fortune ruled the deities had to be carefully coddled. These gods were very high maintenance. Religion was more like magic. If you wanted a certain result you made a certain sacrifice or performed a certain ritual. If you did not, then the gods could become angry and vengeful! You did not want to offend a god. The difference of course between those deities and the Christian God is that the latter cannot be offended.

This is what lies behind the question the disciples asked. Someone must have sinned to for this poor man to have been born blind. Surely God must have been offended to have caused the blind man to suffer as he did.

But Jesus corrects them. “It was not that this man sinned, or his parents, but that the works of God might be made manifest in him.”

We must careful here that we do not make another mistake. Does God create suffering so that he can make himself look good? In other words, are we merely pawns for a divine, capricious and irresistible super-ego to use?

The answer is no. We see in Jesus the manifestation of God’s nature and intent and that is to heal, to correct, to love completely and unselfishly. There is no evil intent in God, no ego that seeks its own at the expense of creation. The Christian god is not Zeus or Moloch or Baal whose moods change as often as the wind and whose actions are egregiously self-centered. Many people act as if God the Father were no better than one of these mythical gods and, in fact, no better than even the best among mortals.

Jesus in this Gospel, as he often does, changes the conversation and in so doing illuminates our darkness with truth.

His answer is a simple one. Instead of trying to figure out the why’s and wherefore’s simply ask, what can I do to alleviate the suffering I see and so give glory to God?

God’s glory is made manifest in the blind man because by healing him Jesus demonstrates that the Father cares for his creation. This is not some divinely-orchestrated drama with the poor man as a pawn, but rather the revealing of the central truth about God: God is the healer of tragedy, not its author.

We must ask ourselves as we go through our lives day in and day out: how can I make manifest the love of God to each person, in every situation?

There is no need to blame or judge the situations we find in life. When we are met with tragedy in the lives of others, we do not need to try and figure out the why’s and wherefore’s. Whatever we decide will be nothing more than a self-serving fantasy. This is beside the point as Jesus demonstrates. What does matter is that we meet everything and everyone that comes to us with the same love and compassion we see in our Lord’s healing of the blind man.

What is more, it is an attitude we need to apply equally to ourselves when we fall into some tragedy, be it sin or despair or disease. Instead of condemning and judging ourselves, a thing even God does not do, we should rather apply mercy and compassion to our suffering selves. In each unhappy event there is something important to learn and an opportunity for growth. Even sin can be an occasion for blessing if treated with compassion and wisdom. Remember, the saying is true, as we treat ourselves so we treat others. If we are harsh and unforgiving towards ourselves, then we will do the same to our neighbors.

The world and its people are hungry for the true and living God. Don’t give them fantasies, superstition and falsehoods.