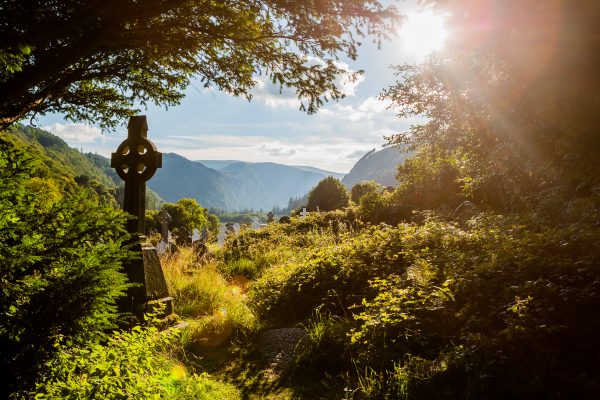 When my family first became Orthodox Christians, we drove 100 miles to church every week. Sunday was church day, we would leave at 7:00 am and frequently did not get back until after dark. We did it because we chose to but now I realize, we needed to.

One Sunday I didn’t feel like going. I wasn’t sick, just kind of tired and out of sorts. I helped get the five kids ready and the family left. I had the whole day to myself, it was bright and sunny and warm and I was miserable. Ten minutes after they had left, I had changed my mind, but this was pre-cellphone days and I couldn’t ask them to come back and get me. I missed being with the family and even though I dislike the long drive, we had a lot of interesting conversations. I also missed socializing with the people at the church. But most of all, I missed the service itself. I realized for me the service had become like water to one lost in the desert. It nourished me, gave me strength and opened my eyes to God all around me.

There were subsequent Sundays when I didn’t go church, if I or if one of the kids was truly ill, or if there was something else I absolutely had to do. But as much as possible, I have not given into the malaise of ‘I don’t feel like going’ or ‘I’m just not into it today’ or ‘I don’t want to see so and so today’. Those are excuses for not exercising or avoiding social events, they should never be excuses for avoiding healing.

The time when I feel the least like attending church is the time I most need to go. She shows me Christ and what He came to do.

According to the synoptic Gospels, the disciples didn’t really know who Jesus was. They knew he was special, but theydidn’t know how. Only once were their eyes opened briefly when Peter declared Jesus to be the Son of God. Jesus told him this was spiritual knowledge given to him. But the knowledge didn’t stick. When Peter tried to stop Jesus going to Jerusalem in order to be killed, Jesus called him ‘satan’. The ones who readily recognized Jesus as the Son of God were the demons He encountered.

Even at the cross and the empty tomb, the disciples didn’t know what was going on. Two of them met an apparently uninformed stranger on the road to Emmaus and told him about recent happenings. When they finished, the stranger began to explain the Hebrew scriptures. He went through all the passages which spoke of Christ. He opened their eyes to the truth and they were so intrigued, they invited him to supper. When the stranger blessed the bread, broke it and gave it to them they immediately recognized Him as the risen Lord Jesus. Then He vanished.

This is what happens every time we celebrate liturgy. During the first half, we sing psalms, read the epistle and gospel of the day. We hear passages from the Old Testament incorporated into every song and prayer. Then we listen as the sermon opens the scriptures to us.

In the second half, the bread and wine is blessed, broken and offered to all during the Eucharist. This is what strengthens us and heal us to become more like Christ to the world around us.

Every Orthodox Church throughout the world celebrates the service with the same hymns, scripture readings and Eucharist. When I attend liturgy, I commune with everyone who is part of the body of Christ, whether I know them or not, whether I like them or not. These are the people who shape me, stumble with me and pick me up. Together, we are the Body of Christ, the Church.

I realize the church is my life. Not just the thing around which my activities revolve but the actual source of my life. The church sustains me. She nourishes me. She provides me with comfort, with life giving food. She IS the body of Christ and separated from her, I would sicken and die.

My mother died recently. My sisters and I ordered the marker and I was confronted with the dash…

Most viewed articles
Strong Orthodox Presence at the 2022 March for Life158
As the End Draws Near – Silence122
Do We Act Differently Than Others?108
Patriarch Porfirije Thanks the Russian Church for Participation in Restoring Serbian Churches102
Metropolitan Onuphry: “The Key to the Doors of Paradise is Repentance”58
March for Life participants optimistic for a post-Roe America: ‘This is just the beginning’47
A Stone Thrown at God and Your Neighbor31
Sunday of the Samaritan Woman2
How We Worship: the Struggle of the American Experience1
The Apostles’ Fast and Theology1
Most popular authors
Pravmir.com team318
Archpriest Stephen Freeman122
Priest Luke A. Veronis107
Ryan Foley47
Protopresbyter Themistoklis Mourtzanos31
Maria Trushanina1