Source: ROCOR
Natalya Mihailova | 23 July 2015
On July 17-18, 2015, the feast day of the Martyrs of Alapaevsk, the convent of Holy Grand Duchess Elizabeth in Munich, Germany, marked its 10th anniversary. 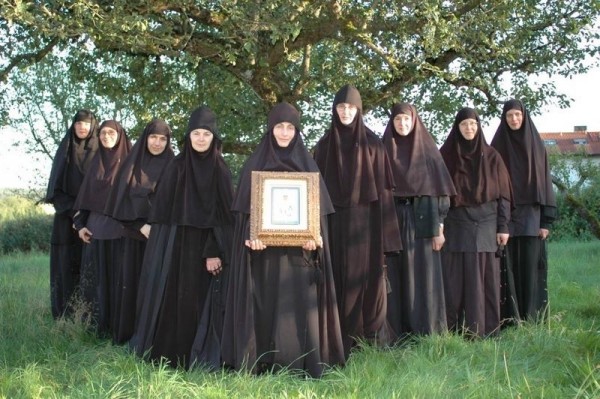 St Elizabeth Skete, located in the picturesque village of Buchendorf, near the Bavarian capital, drew a multitude of clergymen and pilgrims. Both all-night vigil and Divine Liturgy were headed by His Eminence Archbishop Mark of Berlin and Germany, who is the spiritual father of the convent.

In his sermon, Protopriest George Harlow noted “Although we congratulate each other on this feast day, it is still connected with sorrow and repentance. Sorrow for our nation, which endured such terrible apostasy from God, and allowed such a terrible murder, which occurred in Alapaevsk. But at the same time, this holiday symbolizes the striving of the people towards repentance, and correction from apostasy.”

In accordance with the decision of the Synod of Bishop of the Russian Church Abroad, Archbishop Mark elevated Nun Maria to the rank of abbess, a joyful yet unexpected surprise for all present. Mother Maria was there at the founding of the convent. It was thanks to her incredible energy that they found a building, which became not only the residence for the nuns, but rooms for many visiting pilgrims, and with her God-given charm was able to convince the head of the local Catholic convent, Maria Ward, to concede their monastic complex to the Russian Church Abroad. In the 10 years since, the complex and adjacent territory have been completely transformed, and continues to develop. The nuns adhere to various obediences, including the organization of an annual summer camp for girls aged 8 to 13. This summer camp began 2 days after the convent feast day.