I awoke in fear, with a clear memory of the extraordinary vision. In the morning I went to Metropolitan Evlogy and told him everything. During which, I asked him: ‘Why Basil the Great?’ The Metropolitan replied: ‘Yes, of course! After all, prior to monasticism Patriarch Tikhon was named Basil Ivanovich Belavin, in honor of St. Basil the Great.’
Metropolitan Benjamin (Fedchenkov) | 13 January 2012

In 1925 I was treated by a well-known doctor from the USA who was later in Paris. The treatment lasted a long time, and we talked about many things. It was said of him that he was initially an unbeliever, as are the majority of today’s doctors and naturalists. But then his beloved wife fell mortally ill. His medical colleagues declared that treatment was pointless. Then he began fervently to pray: “O Lord, if You exist, save my wife!”

In the morning, accompanied by a doctor friend who came specifically in order to confirm the patient’s death, he went into his wife’s room. She turned out to be almost healthy, and soon recovered completely. They are now living happily. The doctor became a believer, and later even became a parishioner in one of the Parisian parishes. Here is what he himself told me during one of our sessions: 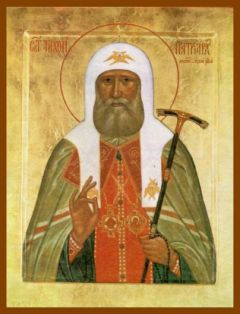 “I had a remarkable dream about Patriarch Tikhon. I seemed to be in front of an enormous field. Suddenly I heard someone’s voice: ‘Now the Most-Holy Theotokos is going past.’ I thought: ‘My God, I am a cursed and sinful man! How dare I see the Theotokos?’ I was overcome by terrible fear. Meanwhile from afar I heard some sort of unusual thunder, a magnificent sound. I understood that this was the Heavenly Queen coming. I fell to the ground from terror, afraid of how I, the sinner, could see Her face without dying. The thunder – or, better to say, some sort of solemn noise or humming – came closer and closer to me. Suddenly I again heard a voice: ‘Here comes the Mother of God for the soul of Patriarch Tikhon, accompanied by St. Basil the Great, who helped him a great deal during his lifetime in administering the Church.’ Then the noise moved further away. The dream ended. I awoke in fear, with a clear memory of the extraordinary vision. In the morning I went to Metropolitan Evlogy and told him everything. During which, I asked him: ‘Why Basil the Great?’ The Metropolitan replied: ‘Yes, of course! After all, prior to monasticism Patriarch Tikhon was named Basil Ivanovich Belavin, in honor of St. Basil the Great.’ 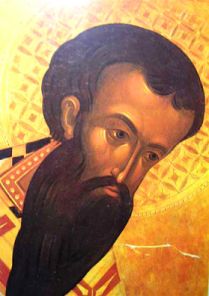 The doctor, of course, had no idea that the Patriarch had his name-day on New Year’s Day, on the day of St. Basil the Great. Therefore, since he did not know this, he could not have come up with it in his dream. It is clear that his dream was supernatural on this basis alone, but both the doctor and the Metropolitan were even more astonished when, on the following day, the newspapers announced that on March 25, the Annunciation of the Mother of God, His Holiness, Patriarch Tikhon, has reposed during the night in Moscow. This means that the doctor had had his dream during the very time of his repose. Now he venerates him as a saint.

It is worth noting that the saints whose names we are given in Baptism care for their namesakes not only when they bear their name in the world, but even when they are tonsured into monasticism and given a new name and a new patron saint (normally when becoming a monk, but not always). Our previous heavenly angel, as it is often called, does not cease to care for the person entrusted to him at Baptism. This is as it should be, for monasticism is a life of repentance. Repentance is a renewal of the grace of Baptism, and therefore it follows that tonsure is both a renewal and a strengthening of the grace of Baptism. Therefore one’s new monastic patron saint only joins one’s main heavenly guardian, given by God at Baptism.

Mother… of God! What about this? Isn’t it amazing? We are so got used to the words like…