Salvation is of the Body: The Intercession of the Saints 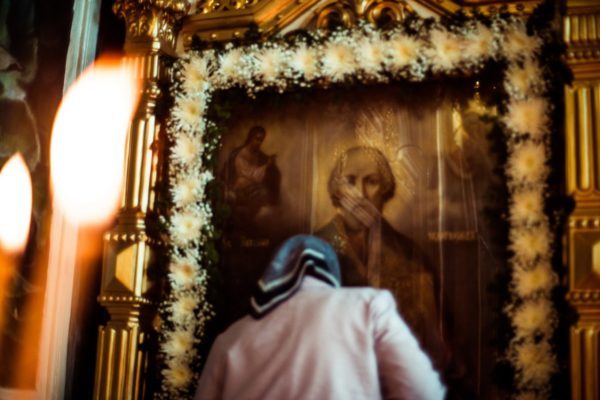 It is very difficult for many converts to Holy Orthodoxy to pray to the saints. For them, it seems, it is a matter of efficiency. They often think: “Why go through an intermediary when you can go straight to the top?”

I call this sort of thinking a corporate model of heaven. In a corporation, intermediaries are often seen as obstacles keeping us from the decision makers at the top of the corporate structure. A salesman is always thinking of ways to get past the secretary to the boss. A worker on the assembly line knows from experience that a complaint will die if it must pass through all of the “proper” channels before it reaches the manager, and so he waits outside the washroom to have a word directly with the manager as she walks back to her office.

But the Kingdom of Heaven is not a corporation. The Kingdom of heaven is a family, a family that functions as one body. The hand cannot say to the foot, “I have no need of you” (c.f. 1 Corinthians 12:21). This is because the foot relies on the hand just as much as the hand relies on the foot. Without hands, it is pretty hard to put on socks and shoes, and without feet it is pretty hard to get from one place to another. The feet do not say to the hands, “No thank you, I have asked the head to put on my socks today.” This is ridiculous because it is the head that energizes and enables the hands to do its work. It is through the hands that the head puts the socks on the feet.

Now the Church, according to St. Paul, is a many membered body. That is, the one body of the Church is made up of many persons (members). One of those persons is Christ, who is the head. The rest of the body of the Church is made up of billions of other people who, like a hand and a foot, depend on each other. It is the head that decides which parts will administer its care to the rest of the body. The care, nourishment, and very life that come from the head flows through some parts of the body to others. Moreover, because in the Kingdom of Heaven these “parts” are human persons, each “part” participates in and actually influences what the Head is distributing to the body.

Here’s a simple illustration. Suppose I (a foot) needed ten dollars. God might prompt you (a hand) to give me ten dollars. But this raises a question, who gave me the ten dollars? You? God? Yes! The grace of God flowed through you, but not as through a tube; for you also expressed compassion and generosity. Again back to the image of a body. Can the hand give without the instruction of the head or the head without the cooperation of the hand?

Let’s take this illustration a step further. Suppose I needed ten dollars and I have prayed and asked God to meet my need. I have also asked a few of my friends who might have ten dollars they can spare. Does asking my friends negate my prayer to God? Or, perhaps, in asking my friends, I recognize that God has distributed his gifts among the body and that the way God normally grants his gifts is through the gracious, god-like actions of the members of his body. This is God’s dispensation, God’s economy. Grace-filled action is neither all God’s doing nor all the doing of the particular human person through whom the Grace-filled action comes. It is a synergy.

The experience of the Church over the ages has taught us that petition is not merely a matter of asking God for what we need, but also a matter of asking one another. But not just asking anyone. Gifts and graces differ. Moreover, and this is huge, Christian maturity and growth in divine Grace differs tremendously. Just because people have ten dollars to spare, doesn’t mean that they have grown in compassion and generosity to the point that they recognize that their money is not their own, but a trust given to them by God to be distributed as the body needs it.

A person who has the spiritual gift of showing mercy, for example, may be so caught up in the pains and cares of her own heart that she just can’t hear the cries of another. A pastor may have many years of training yet to go before he is ready to give anyone advice. This is part of the reason why the Church recognizes saints. In a sense, every Christian is a saint. “Saint” means “holy one.” So, in as much as every Christian participates in the holiness of Christ, all Christians are saints. However, not every Christian actualizes this holiness.

The Church calls saints those whose lives and/or teachings have manifested a high degree of actualized holiness. These, the church calls saints not only so that their lives may be emulated and their teachings respected. These are called saints so that we may pray to them, that we may ask them to help us, that we may look to them for the Grace of God which God in his economy has distributed to the body for the body.

Some Orthodox Christians like to make a distinction between “praying to God” and “asking the saints to pray to God for us.” I think this is a false distinction, for one of the definitions of “pray” is “ask.” However, a distinction that I find a little more useful is that of “ask” as opposed to “intercede.” So we might say that we ask/pray for the saints to intercede for us. But even this can create a problem if, instead of seeing the Kingdom of Heaven as a family that functions as one body, we see it as a business, as a corporation.

The saints don’t just send our prayer up the chain of command for us, only to have God at the top grant or not grant our request. Rather, the saints intercede for us both in the sense that they carry with us our petitions to God, and also in the sense that they participate in distributing the gifts of God’s Grace. For example, God often performs miracles through the intercession of saints, so that it is possible to say, “St. Nektarios healed me,” which is the same thing as saying, “God healed me.” It’s a body, it’s a family. St. Nektarios is doing what God is doing.

Paradise is open for all, yet why do I not enter?

How (not) To Change A Corrupt World

The Prophet Samuel was one of the holiest prophets of the Old Testament.  But what I find most interesting…

Most viewed articles
Number of Christians Murdered for Faith Rose 60 Percent in 2020: 50 Most Dangerous Countries to Be a Christian173
Admitting That We Hate165
Funeral for Metropolitan Philaret Held in Minsk105
Building a Fire and Preparing for Theophany82
God Is With Us… And Nothing Else Matters52
Churches to Reopen in Greece on January 1847
I Have Fought the Good Fight, I Have Completed the Race26
Most popular authors
Charlene Aaron173
Archpriest Michael Gillis165
Pravmir.com team151
Fr Gregory Scratch82
Fr. Gabriel Bilas52
Metropolitan Hilarion (Alfeyev)26
Maria Trushanina1