Miracle Reported of the Resurrection of a Baby Girl in Belgium

The following report was released by Fr. Dionysios Tampakis, and is dated 22 January 2018. It was told to him by Abbess Arsenia of the Monastery of Christ of the Forest on the island of Paros, where the tomb of Saint Arsenios of Paros and the center of his veneration is located.

Abbess Arsenia Tsantouli (Abbess of the Monastery where Saint Arsenios of Paros lived in asceticism) and the Nuns related to us the following astonishing miracle:

For many years the sister of Abbess Arsenia lived in Belgium, where she had a family, and her granddaughter was made worthy five months ago to become a mother.

The baby girl was baptized this year, 2018, on the feast of Theophany and received the name Arsenia in honor of the Venerable Arsenios.

However, the baby got sick suddenly and they took her to the hospital with dyspnea.

That very day, a Greek doctor, who was in that very hospital, was making his rounds, and received as a visitor an old man with a cane, whom he told that the baby was dead. The old man told him to go and perform chest compressions and resuscitation, even though 24 hours had passed since her death was confirmed by science, and he further said that the child would live.

The doctor was impressed by this so he did by the letter what the old man said, and the baby Arsenia, to the glory of God, returned to life.

As the mother returned to the hospital in order to prepare for the funeral, she found her baby girl alive in her bed.

The old man who spoke to the doctor was Saint Arsenios himself, as he appears in his icon.

“God is wondrous among His Saints!” 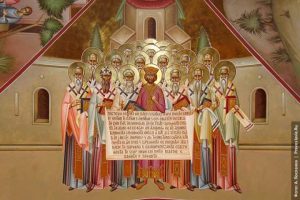 As a former Roman Catholic, I used to always view the Orthodox with a kind of…