I’m afraid I can’t post the pictures of the dead as they are horrific. However, I would like to share only one picture of Vivian and her killed fiancé Michael. Vivian was engaged to Michael two months before the massacre. The ambitious couple was dreaming of a new Egypt that could bring a better social justice for their future kids, as she said.
Minas Monir | 13 October 2011

Mina Daniel was a 25 years old Egyptian Christian activist. Mina was among the first wave that managed to break into Tahrir square on the “Friday of Wrath.” Mina was lucky enough to survive from this abyss, but with one bullet in his left leg. He was among those who stayed in Tahrir square defending their rights against the thugs ordered by Mubarak’s assistants to eliminate them. That’s why Mina couldn’t leave the square to take the bullet out of his leg until the glorious day, the 11th of February, when Mubarak was forced to step down. Two days ago, Mina was shot again. This time he was not so fortunate because the bullet penetrated his lungs and exited from his back leaving him dead. Mina was among 25 Copts known so far to have been killed by the Egyptian military killing machine. Ironically, he was to some extent lucky that he died in one piece as many of his friends had their organs crushed under the wheels of the merciless military vans. 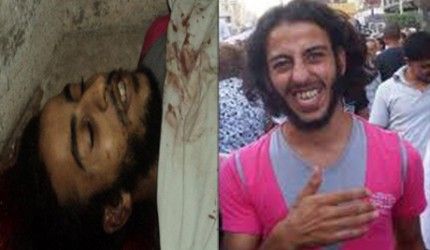 Mina Daniel, from right to left, during the January 28th “Friday of Wrath” protests. Next, his dead body a few days ago.

The story started a week ago and I covered it in an article on Pravmir.

Copts were frustrated after the “blatant bias of the government in favor of the fundamentalist aggressors,” as concluded in the fact-finding committee report. However the complete silence and absence of justice forced Copts to launch a peaceful protest that was prepared for three days earlier. The protest aimed to march from Shubra , a majority Christian district in Cairo, to the state TV building, known as Maspero, with no intention to sit-in but to leave around 9pm. The protest started its marching with wooden crosses and icons towards Maspero. News websites were snowed under with reports about attacks on the marchers, with stones thrown by people coming from side streets in order to bring it to a halt. But this didn’t stop the march, which included many brilliant Muslim activists as well. However, when the march approached the state TV building something, still unknown, happened that led the army to start its aggression against protesters.

I started my previously mentioned article by arguing that the Copts are suffering through the double impact of political and religious discrimination. That was literally actualized that day. For the first time in the history of Egyptian media, even during Mubarak’s reign, TV news broadcasters explicitly asked people to “go out and rescue the unarmed military from the striking Copts who are shooting them” as Rasha Magdy, the Egyptian news reporter said!

Thousands of incited Muslims went out to help the army in attacking trapped Copts. This video shows how the army was shooting Copts. While this one shows how the military vans were moving around in attempt to crash people by running over them.

I’m afraid I can’t post the pictures of the dead as they are horrific. However, I would like to share only one picture of Vivian and her killed fiancé Michael. Vivian was engaged to Michael two months before the massacre. The ambitious couple was dreaming of a new Egypt that could bring a better social justice for their future kids, as she said. However, Vivian reported that she lost Michael during the protest and found his right leg crashed under a military van then a group of soldiers shouting “you infidels” surrounded them and started beating him till he died while looking at her. 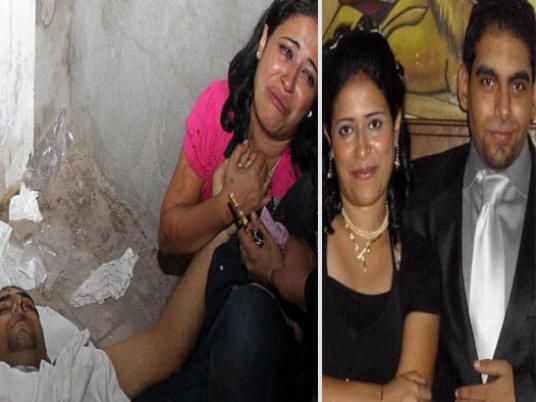 From right to left, Michael and Vivian engaged, behind them the classic icon of St. Mark the apostle, two months before the massacre. Next, Vivian and her fiancé after the genocide, mourning while holding her wooden cross and Michael’s hand on the floor of the inundated Coptic hospital

After the systematic incitement and deliberate intrigue of the different state media sectors, including TV and press, hundreds of injured and killed cases were investigated by the forensic medicine commission. The report of the commission showed that the deaths were caused by direct shooting, crushing using vans and deadly beating with sharp tools such as swords. The latter cause cannot be attributed to the army. Hussam Bahgat, Nawara Negm and other Muslim activists who joined the Coptic protests reported that civilians holding knives and swords attacked the demonstrators. When the activists asked them about the reason, they simply said that they reacted according to the appeals of state media to “protect the army from the Coptic attack.”

I feel enough pain that I can’t go beyond this story towards the political context. That’s why I will just shed light on the human aspect and leave the political analysis later.

First, whether we, humans, were responsible for what happened or not, we have to admit that the page of human history has become bloodstained with the blood of those innocents. We, human beings, failed in the test to stamp out the barbaric mentality of mass murder.

We are another generation that failed with all its massive religious institutions, political organizations, outstanding technologies and global humanistic bodies to stand for human values and the rights of a religious minority. We are part of the first twenty first century generation that is witnessing a new massacre. This is how this generation will be known in the future.