Source: No Other Foundation
We live as strangers in this age until we come to the heavenly homeland, the city which has foundations, whose architect and builder is God. Like Abram, we desire a better country than anything found down here—that is, a heavenly one. That is why God is not ashamed to be called our God (Hebrews 11:16).
Archpriest Lawrence Farley | 15 May 2021 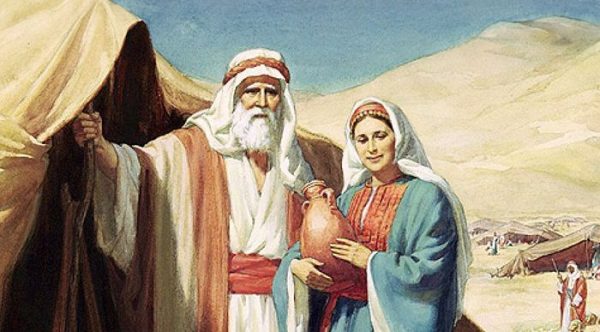 Significantly the story of the salvation of the world began in a pagan place far away from what would eventually become the Promised Land. That is, it began in Ur of the Chaldeans with the emigration of the family of Terah (Genesis 11:31). What prompted Terah to uproot his family from a prosperous city and to wander afar from all the security he had known we may never know. Was he part of a movement that emigrated from Ur due to political instability or threat or economic woes? All the sacred text tells us is that he left Ur with his family (including his son Abram) and settled in Haran. There he died and was buried. Whatever vision or plan drove him from Ur fell to his son Abram, and God confirmed to the man (then seventy-five years old) that he should continue the wanderings of his father and leave Haran. Also significantly, God did not divulge to Abram his final destination, but only said, “Go forth from your country and from your kindred and from your father’s house to the land which I will show you” (Genesis 12:1)—no mention of destination, no map, no agenda; just “pack up and go”. And Abram packed up and went.

Reflecting upon this, the author of the Epistle to the Hebrews said, “He was looking for the city which has foundations, whose architect and builder is God” (Hebrews 11:10). That is, he was not just an emigrant; he was a visionary. He was looking for something which this world could not afford. If it was just a matter of looking for earthly joy and security, Abram could have returned from Haran to Ur, for after his father’s death he “had the opportunity to return” (Hebrews 11:15). But Abram was not looking for an earthly city, but for a heavenly one, and so he moved on, not knowing his final destination, but trusting in the word of his God.

He ended his journey in Canaan, then inhabited by numerous and powerful clans and peoples. Among them he lived as a sojourner and a stranger, owning no land. When his wife Sarah died, he had to barter with the locals to secure a grave for her.

We ask: why choose Terah and Abram in Ur? Why did not God choose someone in Canaan to be the recipient of His call and promise? For in that case the faithful Canaanite need not have moved and emigrated, but simply have stayed on in the land of his birth and eventually inherited the promises and the covenant as Abraham did. Why choose someone far from the intended destination in Canaan?

We answer: to reveal that faith in this age is a pilgrimage, a journey, and that we are meant to live as strangers and sojourners in this age, even as Abram did in the land of Canaan. This earth is not our true and final home, any more than Ur was intended to be the true and final home of Abram. Like Abram we hear the call of God in our hearts, and pack up and move on. We live as strangers in this age until we come to the heavenly homeland, the city which has foundations, whose architect and builder is God. Like Abram, we desire a better country than anything found down here—that is, a heavenly one. That is why God is not ashamed to be called our God (Hebrews 11:16).

When Abram dwelt in Canaan, he owned no land at all. Yet God still promised that his descendants would inherit everything. Abram would become Abraham, the father of a multitude of nations (Genesis 17:5), and his descendants would be too numerous to count. Abram had trouble believing this—after all, he was almost a hundred years old by then and his wife was well past the years of child-bearing. The only heir he had was Eliezer, a slave bought from Damascus (Genesis 15:2). God brought Abram out of his tent and bid him look not down at the dust, but up at the sky. Could he see the uncountable stars shining above him? The descendants that would come from his body would be as numerous as those stars. Abram believed God, and it was counted to him as righteousness. By believing God’s promise, Abraham became the friend of God. God told him to walk before Him and be blameless—i.e. love and serve Him alone, forsaking all other gods. The sign between them was circumcision, the seal on Abraham’s faith, the covenant in his flesh and in the flesh of his descendants after him that they would love and serve Abraham’s God alone.

What does this story mean for us? For we are Abraham’s children, and serve his God. I suggest three things.

First, it means that like Abraham we are strangers and sojourners on the earth. Abraham was born in Ur; we are born in America or Canada or in other earthly nations. But those places are not our home. Like our father, we are looking for a city that has foundations. We may live, vote, collect our mail, and pay taxes here, but our heart is elsewhere. We desire a better country than the one we currently live in; and that is why God is not ashamed to be called our God.

Secondly, it means that like Abraham, we believe in a God who brings life out of death. Abraham heard God’s word that a son would come from his union with Sarah—Sarah, whose womb was dead, and Abraham, who at about a hundred years old was as good as dead himself (Romans 4:19). Yet he did not doubt this miracle, but believed that his God could bring death out of life. We have the same faith, for we believe that God brought Jesus alive from death, raising Him from the dead. This is what justifies us, and what makes us, like our father, the friends of God.

Finally, like Abraham we are called to walk before God and be perfect (Genesis 17:1). The word often rendered “perfect” or “blameless” is the Hebrew tamim, meaning having integrity. We must worship God alone, for our life now belongs only to Him. We must not be double-minded, trying to worship both God and Mammon. We now have nothing to do with other gods.

That is what baptism means, for it is our spiritual circumcision, the seal upon our hearts and the sign that we have turned to God in tenderness of heart and now belong to Him (Colossians 2:11). We have circumcised our hearts and so have fulfilled the prophetic meaning of the sign God gave to Abraham (Deuteronomy 10:16, Romans 2:28). This is what it means to be Abraham’s children.