The Face of Christ on Orthodox Crosses 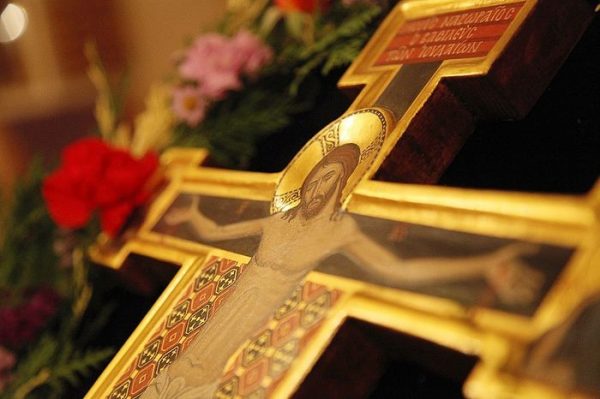 A friend commented that the peaceful (though sometimes sad) look on the face of Christ and His posture seen on most Orthodox crosses – especially the large ones used on Great and Holy Thursday and Friday – are a bit odd when compared with the medieval crosses found in many places in western Europe. The latter show what is probably a more accurate view of Christ as He was dying, face and body contorted in unimaginable pain. My friend said that it would be more meaningful to show Christ frozen in His death throes, as those medieval crosses do.

Our crosses, however, don’t show Him dying; they show Him dead. In the Wisdom of Solomon, Chapter 3, we read of how God has accepted the sacrificial lives of His servants: they are akin to “gold in the furnace.” Subjected to intense heat, gold melts into a pool of liquid, and is purified from all contaminants. Though the world views them as having been severely punished, they see the reward of immortality. Thus, though their passing is seen as horrible, “they are at peace” (v. 3).

Christ is at peace. He has fulfilled all that was expected of Him on earth. He trusted that His Father would raise Him from the dead by the power of the Spirit. He became the “Man of Sorrows” (Isaiah 53:1–11), and endured everything for us. Now He is at peace. His work on earth is done, summed up in His final words according to Saint John (19:36): “It is finished” (or perhaps more accurately, “It is completed,” or “consummated.”). Meanwhile, His soul is obliterating Hades and crippling Hell until its final destruction at His Second Coming. He is winning the battle against sin and death. He will rise in the glory of His Kingdom. The agony is over, the blessedness is around the corner. 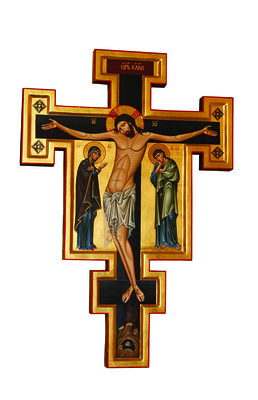 This dichotomy is seen in the Orthodox cross. Christ is hanging on the Tree like a picture on a wall. This put all His weight on the front of His chest, pushing His lungs against His rib cage. Those crucified rarely bled to death: they suffocated. The Romans devised another nasty twist by placing a cross-bar at the crucified person’s feet: he could prop himself up and relieve the pressure, but not for long. Far from being a relief, it would actually prolong the agony.

Nails through His hands and feet, right past major nerves induces more agony. Then there is the hole in His side. The Bible makes clear how agonizing are His final moments, culminating in His extremely human cries to His Father and God, “My God, My God, why hast Thou forsaken Me?” (Psalm 21/22:1; Mark 15:34–37). These words are counter-balanced by His last ones, according to Saint Luke: “Father, into Thy hands I commit My spirit!” (Luke 23:46).

He has endured all, He has suffered incomprehensibly insulting treatment from His own creatures and been put to a heinous and agonizing death by them. Yet, as Solomon said, “He is at peace.” Death has a hold on Him because He let it, just as He let the Devil have the Prophet Job … for a while. He does not simply have hope in immortality, He is immortality. He will defeat Death, He will rise again. Therefore, He is at peace.

So the peaceful depiction of Christ on the cross is not a “sanitizing” of what He went through, making it more palatable for the observer, but an accurate depiction of what He went through viewed – as with everything else in the Church – through the lens of His Resurrection (1 Corinthians 15:13–17). The moment Life met Death “face to face” removed its sting, and abolished its victory (“Catechetical Sermon of St. John Chrysostom,” on 1 Corinthians 15:55). Christ trampled down Death by His death.

This triumphal peace is replicated in the icons of the saints – especially the martyrs. The agony of their deaths does not show, for example, even in most icons showing the Forerunner holding his own head. They are at peace. In this, we see our reality: the agonizing tragedy of death, yet the peace of trust in the resurrection to eternal life.

Christ is the first person to die Who didn’t have to fear the finality of death. Those of us who trust in Him, share in that gift. As shown above, this didn’t make Him blasé about dying. He agonizingly asked that, if possible, the cup be taken from Him – before voluntarily accepting His Father’s will (Luke 22:41–44). Then He suffered greatly on the cross. In the end, however, He was at peace, because He knew He would win. Death cannot beat the Life of all (John 1:4–5), nor can it claim dominion over those in whom He lives (Galatians 2:20).

I once saw a woman, on a Roman Catholic TV show, talk about her youth as a Protestant. Specifically, she mentioned a time she and her mother visited a Catholic church for some ecumenical gathering. Her mother had tears in her eyes. When the woman asked why, her mother – pointing to the crucifix – said, “Those poor Catholics, they don’t know He rose from the dead,” (as though Catholics don’t celebrate Easter).

The Orthodox Church – like our estranged sister Church of Rome – does not (outside the Paschal Season) hide the uncomfortable sight of the God-Man hanging from the cross; executed, bleeding from forehead, hands, side and feet, as many Protestants do. Indeed, in keeping with the words of St. Paul, we boast in it (Galatians 6:14). On three days outside Holy Week we adorn the cross – with Christ depicted on it – and venerate it (the Sundays of the Veneration, Procession and Elevation). We simply do not show Him in His death throes, enduring the agony of the death penalty accorded thieves and traitors. We show the mystery of His suffering: He is dead, yet at peace. By His death, Death is dead, and the dead are alive.

It pairs well with that other uniquely Orthodox mystery of Holy Week, “joyful sorrow.” The ever-memorable Fr. Alexander Schmemann, who coined the phrase, stated that the sorrow of Good Friday isn’t replaced by joy, it is transformed into it. He said this describing the beautiful celebration of Christ’s descent into Hades on Holy Saturday, but it is equally applicable to our discussion. In the placid visage of Christ on the cross, we see that transformation frozen, the sorrow of His death changing to the joy of His harrowing of Hades and coming Resurrection. He is still dead, but His death is temporary; for, while His body hangs there (and soon is placed in the tomb), His soul is bringing life to all and a victory which is eternal. The agony is over, the joy is being experienced by those in Hades (seen in the Icon of Christ’s Descent into Hades, popularly mistaken as the Paschal icon). Soon it will be known by those on earth. With His work on earth complete (John 17:4), Christ – bodily – is experiencing a peaceful rest, just as He did – bodiless – on the original “Sabbath.” “This is the most-blessed Sabbath. This is the day of rest. On which the Only-begotten Son of God rests from all His works. Through the dispensation of death, He rested in the flesh” (“Lord, I Have Cried,” Doxastikon of Pascha sung on Holy Saturday). The rest in the tomb began on the cross, and that is what we see. He is at peace, having endured unimaginable suffering for the salvation of His largely ungrateful creatures (Matthew 17:17 and 23:37). He is at rest, having labored among them, renewing His creation and people as He promised.

Finally, we have the Prince of Peace, now the King of Glory. For it is by His death that Christ enters into His glory and His Kingdom (Luke 24:25–27; John 12:16, 23–33). It is not so much that He comes “into” His Kingdom, but that He brings His Kingdom with Him. We see this on the cross; the King of Glory on His earthly throne with His Crown (of thorns). That is why, on Feasts of the cross, we sing “Extol the Lord our God, worship at His footstool (the cross), for He is holy” (Psalm 98/99:5). Here is the Man, executed as a traitor and a heretic in the most ghastly, agonizing and accursed manner available (Deuteronomy 21:22–23; Galatians 3:13). Though still hanging on the tree, He appears to be simply taking rest in sleep. It is a victory nap. For by His death the condemned criminal is now the all-conquering righteous King and Judge, Whose name is exalted above every other (Philippians 2:5–11). As St. Paul said, to non-believers this is scandalous (the method of execution) and ridiculous (victory in death). To us who believe, however, Christ crucified is the power of God and wisdom of God (1 Corinthians 1:18–24). This is why we depict Christ as we do on our crosses.

Published in the March/April 2022 issue of The WORD

Today hell groans and cries aloud: "My power has been destroyed. I accepted a mortal man as one…

Why a Fast for Dormition?