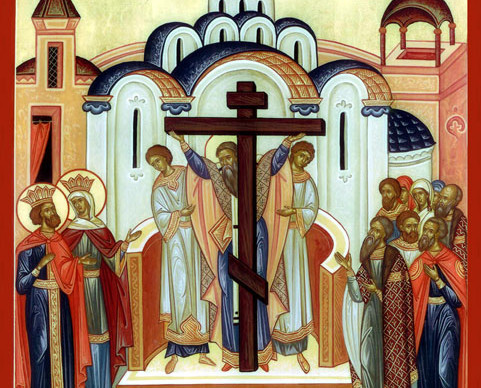 The Cross is everything for us!  We bring it out to the center of the Church.  We decorate it with beautiful and fragrant flowers.  We bow down low before the life-giving wood.  In all of these external movements, we give Glory to God for the Cross!  But have we been able to exalt the Cross in our own lives?  Has the Cross’s meaning penetrated the very fabric of our being?

This feast day is one that is unknown to many in the modern Christian world, because you will not find it anywhere in Holy Scripture.  It is found rather through Holy Tradition, in the history books, and in the hymnography and poetry of the Ancient Church. When our Lord was taken down from the Cross, the instrument of His death remained on Golgotha for some time before it was eventually thrown down into the trash heap near the spot of the crucifixion.

A few decades later, after the city of Jerusalem was destroyed, Emperor Hadrian gave orders to build a temple over the land where the cross was buried to the Roman Goddess Venus, who was the Goddess of fornication, lust, and desire.

So imagine if you will, for several hundred years, on the very spot that the True God gave His life for the human race, He had to watch from above as His own creation offered sacrifices to the Goddess of the Passions, just a few meters above the Cross of Christ!

This is the first lesson for us in the history of the cross.  When we come into an Orthodox Church, we see the cross of Christ depicted literally everywhere.  It is on the Altar table, on the top of the Royal doors, even on the fabric of the icon stands.  Many of our Churches are even designed to be constructed in the shape of the cross, leaving the faithful to worship in the very center of it!  The Cross is everywhere!  It is raised! It is prominent!  It is exalted!

Can we claim the same thing with our own spiritual crosses?  How much is the cross exalted within us?  How often do we think about it?  Are we constantly putting it on ourselves outside of Church? Does our Lord’s love take precedent in our own lives, above everything else in this world?  Or is it sometimes buried, neglected, and “thrown into the trash heap” as we occupy ourselves with earthly concerns?

After Emperor Constantine issued the Edict of Milan, which stopped the persecution of Christians throughout the empire, he sent his elderly mother St. Helen to Jerusalem to find the Holy Places that had been decimated and buried by the Pagans.  After years of searching, she met with an elderly Hebrew man named Jude, who told her that Golgotha was buried beneath the temple of Venus.  St. Helen had the temple demolished and the land excavated, and it was there that they found three crosses, a board with the inscription “King of the Jews”, and four nails that were used to put our Lord to death.

To determine which of the crosses was that of Christ’s, the Patriarch of Jerusalem ordered that a corpse be brought to the site.  They laid a dead man on the three crosses, and when he was laid on the cross of our Lord, his eyes opened as he came to life.  The entire Christian world celebrated and rejoiced at the finding of the true cross!  It was lifted up and exalted on high!

One year later, Emperor Constantine ordered that the area surrounding Golgotha and the Empty Tomb be enclosed in a massive Church that was finished 9 years after the finding of the Cross.  The Church of the Holy Sepulcher, although it has been rebuilt several times throughout history, still stands today over those sacred sites, welcoming Christian pilgrims from around the world! Here in lies our second lesson…in order to dig through the trash heap of our passions, and in order to excavate the cross that is within our hearts…there is great effort that is required!

Being a half a world removed from the Holy Places that St. Constantine and Helen preserved for us, we do not have the benefit of walking into the Holy Sepulcher and physically experiencing the energy that radiates from the tomb of Christ.  We rather gain true knowledge of the power of the Cross by doing what our Lord tells us today in the Gospel:  Denying ourselves of our own selfish wants and desires, taking up our hardships, sufferings, and doubts, and following after Him.