The Falling Asleep of the Theotokos 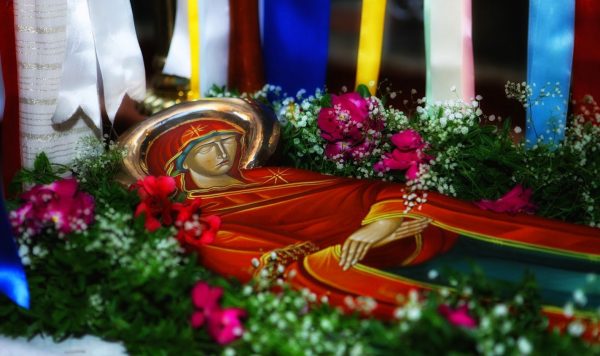 Orthodox title this day the Falling Asleep of the Theotokos – or her Dormition (from the Latin) or her Kimissis (Κοίμησις Θεοτόκου) in Greek. “Falling asleep” means death. *

People all over the world honor their departed loved ones. It’s the natural thing to do. I pray for my mother daily. Last week when we were traveling in Ohio my son, grandson and I (it was a guys’ trip) stopped at my parents’ grave and offered Trisagion prayers for them.

Say hello to my son David and my grandson Matthew.

I pray for my mom especially on the date of her death, July 25. Did the Virgin Mary really die on August 15? No one knows for sure. But my uneducated guess is that if, 34 years later, I remember the date of my mother’s death, the early Christians likely remembered the date of Mary’s death and passed it down in the Church.

OK, so her death is not recorded in the Bible. But she was there in the very early Church (Acts 1:14), and Christ had given her into the care of the Apostle John the Theologian. How could the early Christians possibly have forgotten her and her death? this Woman who was the Theotokos, the “bearer of God”? who raised and shaped our dear Lord Jesus when he was a boy? this Woman who has become our Mother, too?

I know some folks have an issue with this title, but listen: After being born of the Virgin Mary, Christ then took his new human family and expanded it into the Church. All who are baptized become children of his Father, and brothers and sisters of Jesus, and if you take him you also get his whole family. When my son in law married into the family, he didn’t get to pick and choose among us. That’s just the way life is. So on what basis should anyone exclude Mary, our Lord’s Mother? For if we are adopted siblings of Jesus, then we are adopted children of his Mother. Mary is Mother of the whole Christian family, Mother of the Church. What could be more obvious?

When she and his adoptive brothers went out to see if he was taking care of himself, Jesus looked at the crowd and said, “Who are my mother and my brothers? All who do the will of my Father in heaven are my brother and sister and mother.” Matthew 12:46-50 An obvious reference to Mary’s “Be it unto me according to your word.”  I remember an old movie which focused on Mary’s face as he said this. Her initial shock (are we being rejected?) slowly turned into a big smile, as she looked out over the crowd, and you could see her realizing: “My family! they’re all my children!”

Orthodox genuinely, naturally love our Mother Mary. To forget her and her death seems almost offensive to us – to think of people ignoring Mom!

What happened at her death?

Roman Catholics title this day the Assumption of the Blessed Virgin Mary. They believe that at Mary’s death she

was assumed (“translated”, “moved”) bodily into heaven – although it was not till 1950 (!) that they declared this to be a dogma necessary for salvation. A few Roman Catholics have even believed that the Mother of God did not die.This is the rather sentimental Latin approach. Compare it to the more sober Orthodox icon below.

Protestants are equally dogmatic. They dogmatically disbelieve in her Assumption. I once visited a Lutheran church which had been given a set of Orthodox icons of the annual feasts. They had them hanging on the walls in the entrance way, for people to see as they went into the church. Good for them! Except for the icon of the Falling Asleep of Mary which showed her Son receiving her soul. I mean, how controversial could that be?! But they offered to give the icon to me “because it isn’t Biblical”. (That again!) Dogmatic disbelief. I almost said, “Neither is Martin Luther”, but I held my tongue. And took the icon.

What exactly do Orthodox believe? We are not so dogmatic as either the Roman Catholics or the Protestants. We certainly believe she was “translated”, taken into heaven (“assumed” in that sense) and glorified there, but, as I say, our Dormition icon shows only Christ receiving her soul under the image of a little child. We have no official teaching about her bodily Assumption.

The first written accounts of her funeral and Assumption appear late, in the 5th and 6th centuries, though they are certainly the product of earlier unwritten tradition. (You might want to read the little book On the Dormition of Mary, which is part of the Popular Patristics series available from Saint Vladimir’s Press.) Some of them say that 3 days after her burial her tomb was found empty. At our services, we sing about some of the stories from these accounts: her burial in Gethsemane, how the Apostles were gathered (on the “clouds”) for her funeral, how Thomas was late again, how Bishop Philotheos of Athens was also there and sang beautifully. (I think this last detail is evidence for the authenticity of the account. Why ever would anyone make this up?) But so far as I  can find, we do not sing about her being assumed bodily.

This is the Troparion for her Falling Asleep. Since the English text is provided only “mid-video”, I’ll include it here:

“O Theotokos, in giving birth you were preserved in virginity, and in your falling asleep you have not forsaken the world. For since you were the Mother of Life, you were translated into Life. Therefore by your intercessions, deliver our souls from death.”

However, the Theotokos has been fully part of the Church, present all over the world. Some saints seem to concentrate their efforts especially in certain areas or for particular purposes. She has been not only in heaven, but here, doing everything everywhere for everybody, like no other saint. Father Alexander Schmemann wrote an essay called The Presence of Mary, pointing out that if you just hang around the Church for a while you discover for yourself that she is here – like her Son, “more present” on earth universally than she was during her earthly lifetime. We don’t need dogmatic definitions to know that.

It is a Mystery. But…

An Episcopal priest friend of mine once said to me, “I want a straight answer: What do you Orthodox really believe? Was she assumed bodily or wasn’t she? Yes or no.” I answered, “Well…  must we have a dogmatic answer? It’s a mystery.” – the typical Orthodox answer when we can’t think what to say. But really, it is a mystery.

However, there are good reasons to believe in Mary’s  bodily Assumption:

1 Most Orthodox seem to have believed in it. The people of God matter here. Some Orthodox churches are dedicated to her Assumption, for example the Assumption Greek Orthodox Church in Madison, Wisconsin.

2 There are no relics of Mary. The cult of relics began very early in Christian history – and again naturally so. Bodies are good, created by God. For that reason traditionally, as still in Orthodoxy, Christians have not cremated the dead. In the Judaeo-Christian tradition we have honored the bodies and burial places of our loved ones. Saint Peter’s body lies in honor in Saint Peter’s Basilica in Rome. Saint Paul’s body likewise lies in Saint Paul’s Outside the Walls. Saint Andrew has moved around a great deal, but his head at least is now back in Patras in Greece where he was crucified, and he is honored there. And so on with a multitude of saints, ancient and modern. But there have never been any relics of Mary. If, as tradition says, she was buried in Gethsemane, her relics have never been found there or anywhere else. Would the early Christians, would the Church have just lost her? There must be another explanation for the absence of her relics. The simplest one is that there weren’t any.

3 It is doctrinally acceptable. There is Old Testament precedent. Elijah/Elias was taken bodily into heaven, and tradition said Moses was too, and probably Enoch. Christ took his risen body with him into heaven at the Ascension. He promised the resurrection of our bodies. We say in the Creed that we “look for the resurrection of the dead.” That means our bodies. Heaven is great enough to take in matter, to receive our bodies. Heaven is not less than physical, it is more than physical. Heaven is super-physical, super-material. In heaven we will be not be less than we are here, but more than we are here. As Blessed Mary already is.

4 Here on earth she has given us so many material signs of her presence. Weeping icons with material “myrrh” – which is just a word for that for which we have no words – flowing from the eyes of innumerable icons. These are not common, but they are far from rare. I have seen 2, maybe 3, myself and I have heard first-hand of many more, and read of far more, all over the world. Are these material manifestions here signs that she is bodily present on the other side?

Most viewed articles
Growing Cold in Faith after a Few Years in Church: Is This Normal?184
How to Survive in Modern City. 8 Essential Conditions118
Bishop Irenei Addresses a Symposium on “The Mother of God in Our Lives” in Los Angeles88
Russian Church to Help Provide Lebanon with Vaccines Against Coronavirus88
It’s All About the Resurrection – Reflecting on the Season85
Over 20 Thousand People Pray for Discrimination of the Ukrainian Orthodox Church60
Vandals Attack Serbian Church in Croatia53
Appeal for Help from the Church of the Mother of God in Austria50
Volunteers from St George Greek Orthodox Church in Rose Bay gather to cook for the homeless47
We’re Being Robbed1
Most popular authors
Pravmir.com team289
Archpriest Nikolai Markovsky184
Fr. Andrei Gavrilenko118
Archpriest Gabriel Rochelle85
Archpriest Georgy Kharlov50
John Voutos47
Archpriest Stephen Freeman1